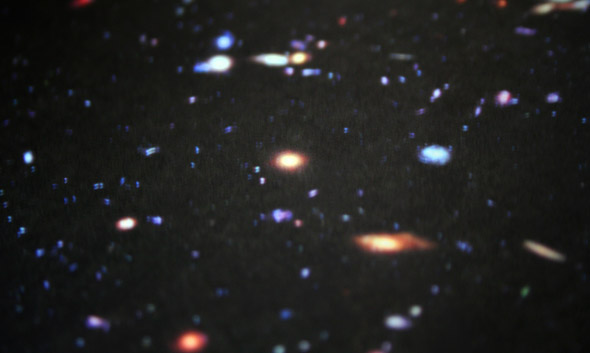 Whilst Terekke fits in on L.I.E.S. as part of the cast of unusual suspects that have come to prominence since the label emerged some three years ago, his soft, smudgy productions have a certain magical quality that’s quite separate from the thrusting, relentless Dance Mania-inspired immediacy of Delroy Edwards, the deranged sonics of Svengalisghost, or Steve Summers’ current lopsided techno manifestation.

Coupled with an enigmatic nature and a lack of tangible output since his emergence with the debut L.I.E.S. white label in the summer of 2011, it’s understandable why there’s been such a level of expectation for this latest Terekke transmission since news of the release first broke earlier this year. The three tracks on the YYYYYYYYYY 12” only serve to heighten the myth of Terekke, expanding on the thick, foggy intricacy of his aforementioned Damn EP with an unassuming degree of ease that has you clamouring for more.

Lazy kick drums introduce the dubby “Bank 3” before Terekke draws out a long, weaving procession of tape hiss coated textures, subtly working the energy levels in a manner that really shows itself when played loud. Don’t pay attention and you’ll miss the wonderful micro edits that precede the arrival of a heavily pitched vocal sample that has proper headfuk potential. There are few other producers that execute this sort of humid, sticky slant on extended rhythmic electronics with such apparent ease and whilst “Bank 3” is undoubtedly conducive to headphone listening, there’s a sense that it could have communally intoxicating effects on a dancefloor if executed at the right moment.

The sedate “Piano” is another one of those Terekke cuts that smirks in the face of lazy beat matching DJs, as the gauzy fuzz teases out a tinny drum beat which gradually locks into loose groove of warm, dubby sonics. It’s a mark of Terekke’s hypnotic talents that you don’t actually notice the drums get sucked back under the tape hiss as the track enters a zone of twilight sensuality, one bearing comparison with the mangled new age house abstractions of Huerco S, especially his Opal Tapes release.

Final track “Amaze” lives up to its title and then some, its various elements switching between forward momentum and merely breathing in a manner that’s similar to some of the best moments from Actress’s last album. However, it’s the wonderfully melancholic vocal sample that bleeds around the edges of the channels that makes this such a memorable track, operating like a pensive ghost stuck in this world with unfinished business.