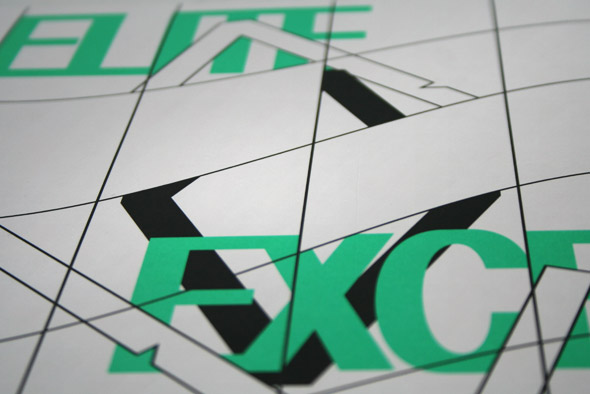 Techno is rarely as thrilling as when it shocks and surprises upon repeated listens. After all, that’s what the genre was built upon; a futuristic mantra that sought to push forwards and expand the emotional and creative horizons of electronic music. Of course techno as a defining tag can mean many things in this day and age, from granite-hewn monochromatic slammers to beatless, synth-drenched sound baths, but this new record from Stellar OM Source seems most closely aligned with the lysergic funk of Juan Atkins in his earliest form, back when techno was a much more compact concept.

“Elite Excel” signals the first outing for the French producer on Rvng Intl ahead of her LP Joy One Mile, an album arranged and mixed by the Leipzig legend Gunnar Wendel, who also provides a remix here under the universally recognised name Kassem Mosse. The duplicitous nature of the track in its original form suits the labels own convoluted message nicely. While the Juan Atkins reference is a fair one, it would sell the marked individuality of the track short to write it off with easy associations. Much of the way in which the elements of the track move can be delineated back to grassroots electro, as the myriad assortment of synth noises and pattering drums steer clear of rigid 4/4 programming in favour of snagged arpeggios and staggered grooves. It’s a dizzying effect the arrangement has, constantly fighting the slipstream of rhythm and yet ever charging forth.

The intricacy of the track is quintessential techno, positively revelling in the wondrous noises that machines can give rise to by squeezing as many into the framework as will fit, and yet the track is steeped in yearning soul. That becomes no more apparent than in the soaring lead synth that comes chiming in through the mid-section of the track, ringing out with misty-eyed intention as all around is rapid-fire. Plotting a psychedelic and constantly engaging course, “Elite Excel” reminds how far producers can take you when they want to.

Mosse’s own remix provides an apt foil to the kinetic A-side. The same twitchy, complex layering abounds, but wielded with a distinctly different modus operandi that favours the slow-cook approach. Slowing the beat down to a measured 4/4 pulse, Mosse gets busy twisting the wealth of material from the original into an equally detailed tapestry of late night charms. There’s plenty of melody to be found spluttering out of synthesisers throughout, while a healthy amount of amelodic matter fills in the gaps between the otherworldly charms. Mosse is never more formidable than in the groove he creates, and there’s no shortage of jagged angles to marvel at as his interpretation shimmers and shimmys its way through the electronic undergrowth.

Records like this restore your faith in techno after one too many sound-alike cuts. Overflowing with singularity and soul, it’s the kind of effort that raises the bar without a whisper of contrivance, shattering preconceptions and leaping forwards without losing accessible pleasure and musicality in the process. If your heart is craving some food after one too many nights locked in an industrial techno dungeon, this may just be the 12” to shed some light in your life.