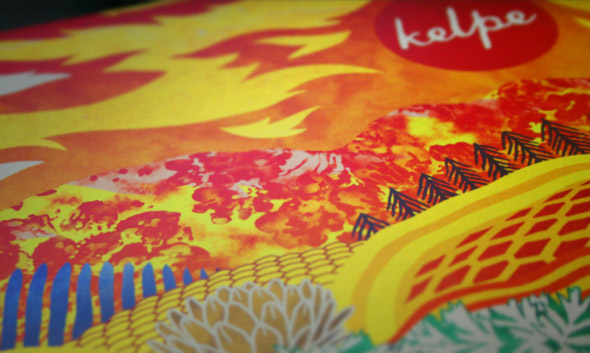 The work of Kel McKeown has always been difficult to pigeonhole. Throughout his career as Kelpe, most spent on J Saul Kane’s formidable DC Recordings imprint, he’s proved adept at delivering music that sits outside of preset genres. A renowned cut-and-splice beatmaker with a passion for live drums, unusual textures, leftfield atmopsherics and fluorescent dayglo synths, his productions have previously drawn comparisons with a wide range of acts.

Some hear echoes of Rustie, Flying Lotus and Hudson Mohawke in some of his distinctive MPC beats, while the tumbling melodies recall classic IDM, in particular Warp icons Boards of Canada and Plaid. His passion for droning electronics and hissing fuzziness suggest a love of the BBC Radiophonic Workshop or, for those of a younger age, Andy Meecham’s early Emperor Machine output on DC Recordings. He’s also noted for performing shows with live drums, delivering sets that blend the boundaries between MPC beatmaking, organic performance and Ableton-style improvisation. Whatever way you look at it, his inventiveness and chameleon-like approach to music making are his greatest assets.

For his loftily titled fourth full length album Fourth: The Golden Eagle – and first since 2008 – McKeown’s once again flipped the script. While he continues to improvise with drummers, tap away at his trusty MPC and meld electronics together in Ableton, he’s also begun to invest in analogue synthesizers (he’s admitted using a variety of synths, including a Moog, Korg Polysix, Korg MS10 and a Doepfer Dark Energy). These, added to a range of previously unlikely traditional instruments (strings and guitars, in particular), make Fourth: The Golden Eagle a very different set to his previous outings.

For starters, there’s a notable warmth and light, not to mention a focus on melody, which occasionally got buried amongst his dark, curious or off-kilter atmospherics. Album opener “Astrolomy” sets the tone, stacking layers of intergalactic synths and emotion-rich synths over loose, organic drums and sun-bright acoustic guitars. There’s a similarly languid, cascading feel to “Nice Eyes in My Size”, where droning, seasick electronics contrast beautifully with near-Balearic music box melodies, shuffling beats and effects-laden guitars. “Glinterland”, meanwhile, boasts vintage stargazing synths and the sort of hectic, loose-limbed jazz drumming that evokes happy memories of some of his most potent live shows.

Yet it’s not all about organic/electronic fusion. The album’s two most arresting moments, “Puds” and impeccable closer “Answered”, are formidably electronic. The former is a thing of great beauty, eking calming, blissful, melodic warmth out of darting, seemingly disorganized electronics. It’s like musical chaos theory at work. The latter, meanwhile, moves from subdued introspection to eyes-wide-shut brilliance over the course of seven memorable minutes. It’s subtly done, as you’d expect, with all manner of quiet shifts, some near perfect chords and just the right amount of twisted electronics and childlike melodies.

There are, of course, more forthright compositions such as “Superzero Theme”, where bold space synths, sludgy hip-hop beats and doom-mongering atmospherics combine perfectly or the warped, curious dream-pop of “Single Stripe”. Both these tracks are built around attractive melodies and wonky rhythms, but gain their power from particularly robust synth sounds and curious electronic noises.

Throughout, the balance is near perfect. There’s enough to attract those drawn towards melodic electronica – and post-IDM in particular – while McKeown’s passion for taking risks and improvising with live players should tickle the fancy of the leftfield heads. There’s plenty going on to appease those of an adventurous musical persuasion, yet the tracks are atmospheric and all-encompassing enough to soothe furrowed brows. By carrying off this balancing act, McKeown has delivered a very special album. More importantly, it may also be the album that finally earns him recognition as a fine producer in his own right. Comparisons are now irrelevant. From this point on, other people’s productions will sound “a bit like Kelpe”.