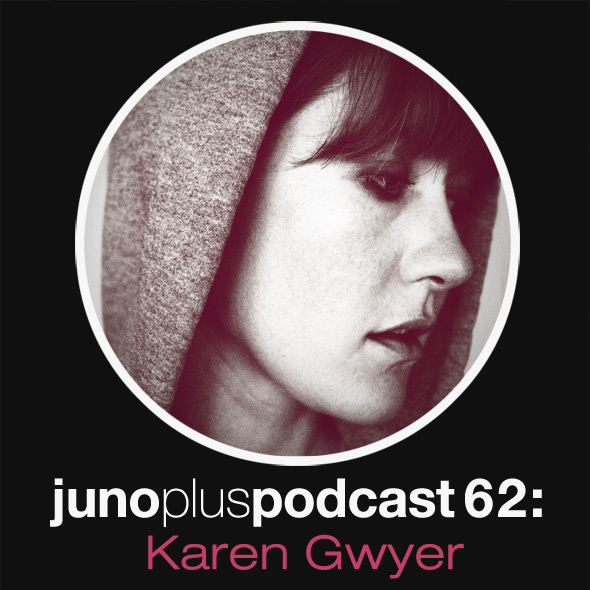 Karen Gwyer leads us through her diverse record collection with a wondrous 50 minute selection.

Born in Ann Arbor, Gwyer’s entire life to date seems to have been closely tied to music in one form or another; a youth spent learning classical instruments at the behest of her cellist parents; becoming entranced by the low budget dance music shows of the late 80s; exposure to the Midwest noise scene as it was first growing and moving to New York as a 17 year old to see the last vestiges of the city’s house culture get swallowed by “tepid guitar-themed tedium”.

Now based in London, Gwyer’s musical experiences have been put to practice with a succession of intriguing self-styled  “Labyrinthine plasmic pulsations” that commenced with I’ve Been You Twice, her contribution to patten’s experimental tape and digital label Kaleidoscope last year. This was followed by Needs Continuum, one of this year’s more engaging debut albums which arrived via the always interesting No Pain In Pop. Gwyer’s relationship with both Kaleidoscope and No Pain In Pop continues to bear new possibilities as the year progresses, recently delivering a remix of Orphan for the former label whilst being the subject of numerous sonic reinventions for the latter.

This has already manifested itself in a free to download collection of remixes from Doom Squad, Not Not Fun artist Samantha Glass, Neon Pulse and new London producer Marrak. Excitingly, this will be complemented by a 12″ of remixes from Torn Hawk entitled Cowboys (For Karen) which is set for release through No Pain In Pop next month. With all this in mind, we invited Karen to join the Juno Plus podcast fray, and she turned in a wonderful selection of records as well as answering some questions we sent via email.

Hi Karen how are things?

Many thanks for doing the mix, where and how was it done?

I pulled together a pile of records, and recorded it at home, straight from the turntables.

Would it be accurate to say you have a pretty diverse record collection?

I married an obsessive record collector, so our collections combined, it’s fairly reasonable. I collect a lot of different stuff, but not usually out of wider desirability. I don’t mind if they pressed a million, and the vinyl’s thin as a hair. Nobody’s going to go apeshit over my ratty Humpty Dance single, but I love it.

Which clearly is a reflection of what reads like a musically fulfilling life from the off?

There was always music. And when I was really little I had a radio in my room that you couldn’t turn off at times; the knob was busted. Radio was so good back then. Full of big personalities, epic chart battles, and dorky free-form university shows.

Was there a specific point where you decided to settle on making what’s quite hypnotic electronic music?

I hope there’s never any settling.

It’s been a few months since your album came out, are you happy with the reception to it?

Oh definitely. It’s great every time anyone mentions that they liked it.

I’ve not seen you discuss your involvement with patten’s Kaleidoscope series which has a pretty interesting central construct. As an artist how did you approach this project?

Straight-to-tape? I just fired up the tape deck, and each one was a performance of sorts. It’s deeply satisfying to make tapes, and I approached it with a bittersweet glee that was once normal, everyday fun.

Patten’s got a deliberately obtuse approach to discussing his music which is quite amusing, do you ever feel like adopting a similar tone when, say, you are asked to discuss recording an album whilst pregnant for the gazillionth time?

Ha, yeah, I couldn’t pull it off, though. I’m one of those types who offers up too much information sometimes. Very American. Maybe it’s a good thing that people just bang on about the pregnancy. Otherwise I might start talking about all sorts of really dull crap. Want to hear how I’m currently recording new music under the psychological anvil that is filing US income tax forms as an expat freelancer? We can talk about that.

You’ve participated in the FC Judd remix project for Public Information, you mentioned in an interview with The Quietus regarding that release that you took the opportunity to have some fun. Is this how you approach remixes in general?

I get a big kick out of doing remixes. It’s like having a new chunk of brain for a while, and it comes with ideas I couldn’t have had.

You also played  the launch parties in Manchester this past weekend, how did they go?

Manchester was great. Graham Massey turned up with an ARP. He kept giving it a whack, and it was wobbling and wheezing all over.

What did your own live set consist of?

A very loud blended trio of new and older tracks, reworked on the spot.

When playing live do you prefer to keep each track distinct from each other or try to weave them into one long form performance?

It’s flowing more as time goes on, but I’m up against legacy and gear issues. I’m selling loads of bits on eBay however, to fund my expansion in the realm of boutique looping equipment and obscure, quasi-tacky drum machines, so watch this space.

Looking to the future, you’ve been working with NPIP on some remix releases from Needs Continuum correct? Can you tell us some more about this?

Due out next month is something quite exciting courtesy of Torn Hawk. Details coming shortly. I can say no more. Bummer, eh!

Anything further planned as the year progresses?

Another album is in the early stages. Something a little different!

Finally, are there any musicians you’ve discovered recently that have left a real impression, like you have no idea how they conceived or executed those sounds?

He’s not a recent discovery, but my other half tried and failed to get Matthew Young’s first record, Recurring Dreams, on eBay for me the other day. I’d only heard his second Traveler’s Advisory LP, which is so insanely beautiful I have a breakdown every time I play it. Dulcimer and Casio drums. Genius. Anyway, his first album – and the guy only made two albums, it kills me! – is all synths, and of course it’s incredible, and maybe one day I can own a copy on vinyl. The way he constructs music is so unexpected and honest. Track two, First Blood, lord have mercy. It’s perfection.