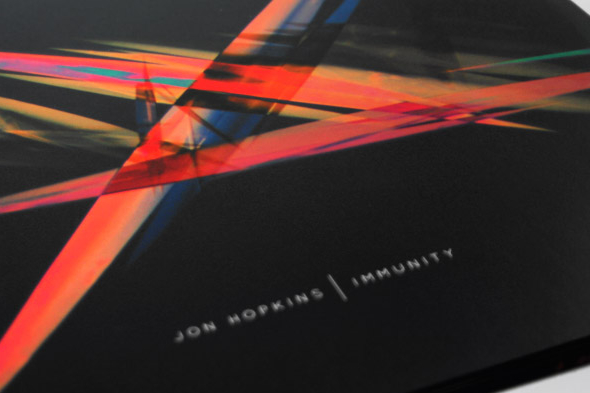 It’s fair to say that Jon Hopkins’ Insides was his grand announcement to the world, displaying a regal brand of electronica steeped in musicianship and production prowess from an artist not widely known beforehand. With the power of Domino Records behind him, Hopkins went on from this achievement to collaborate with Brian Eno and King Creosote, as well as undertaking soundtrack work for the 2010 sci-fi film Monsters, seemingly confirming his place in the upper echelons of electronic composition.

As such, there is always going to be a heavy weight of expectation hovering over the next album proper, not least for an artist whose style is positively built for long-form releases. Be that as it may, there are qualities to Hopkins’ music that seem inescapable, and it’s no surprise to hear Immunity draped in the same ethereal soundtrack orchestrations that give his compositions that learned, accomplished tone.

If anything though, there is a different kind of energy at work in the rhythmic department. Taking “Open Eye Signal” as a case in point, a solid 4/4 thrum powers the expansive track where before Hopkins would be known to embrace fractured beats. This is far from standard techno machination of course; the very nature of electronica is to subvert dance music forms and Hopkins has certainly not turned his back on that principle. Even if the kick may be uniform and regimented, the snare skips and rattles uncomfortably, while microns of percussion pivot around this shuffled groove.

Really though, it’s the synthesised elements that define the track, and the lead synth comes warbling out of the blocks with a thrust that calls to mind the Border Community brand of emotive techno. Everything surges towards a smoothly arced crescendo, and you wonder for a moment if Hopkins had live sets in mind when crafting a song such as this. It’s not dissimilar to the way in which Four Tet began to embrace house and techno constructs in his own infinitesimal electronics.

Just to reassure you that Jon Hopkins has not forsaken his remit as a ‘listening’ proposition, “Breathe This Air” begins with a plaintive, delicate study in lingering piano chords and found sounds that perfectly demonstrate the restraint and poise of a proficient, diverse producer. Even as the track swells into a leftfield garage shuffle, the track feels more tilted towards emotional weight than physical impact.

There are some outright ambient moments, such as “Abandon Window” with its piano chords and the Eno-style reverb decays that clamour underneath them. Likewise the sprawling 12 minutes of “Sun Harmonics” may enjoy some time propelled by a kick and hat combo, but it eventually melts away to a soothing tonic of shapeless tone before ever so gently changing key. When it segues into the album closer, “Immunity”, the tension of such subtle, lingering sound being resolved elicits an exhalation of relief, whether you do it for real or just in your head.

For dedicated fans of Hopkins’ approach, Immunity has everything they will be craving, while bringing a fresh sense of movement to the table at the same time. Striking a fine balance between moving forwards and recognising his strengths, Hopkins has made a sterling return when the pressure was mounted all around him.