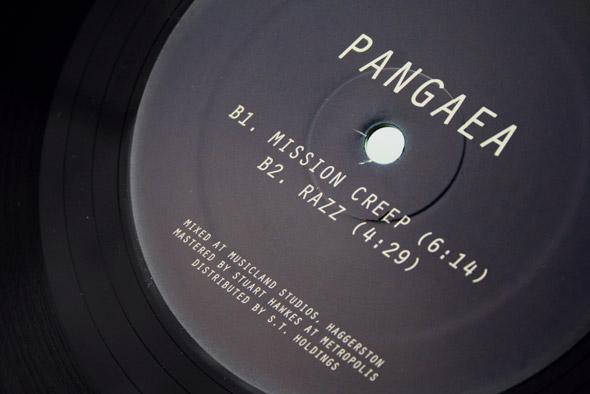 There’s always a timeless quality to Kevin McAuley’s music, with the half-life of last year’s Release double pack still lingering in the air even as the Hessle Audio producer is turning his hand to new ventures. The decision to found his own label in Hadal is an interesting one given that, much like Pearson Sound, his musical identity has largely been built around the bedrock of the world beating label they run with Ben UFO. In truth though, there are no rules per se to the sound on Hessle, and likewise on this new release McAuley sounds as exploratory and deft as ever.

It’s hard to argue that Pangaea has sounded in finer fettle than he does on “Viaduct”, bringing his usually wayward beats into focus and yet still coming off utterly beguiling with a deadly array of percussive darts that meet somewhere between breakbeat and techno. Of course there has always been a healthy amount of warmth and texture across all Pangaea output, and so it is here as wobbly three note warbles melt into harmonic pairs and ethereal chimes rain down from up high, but only before the vibe switches entirely into a dark, robotic workout.

“Mission Creep” represents something of a departure as McAuley exercises some restraint, entering an almost Villalobos-like meditative state, albeit with rougher drums and a greater sense of urgency. It can’t stay that way forever, and the vocal slices that come feeding in point the way. Taking shapeless grunts rather than solid speech is a smart move that upends the saccharine quality of so much vocal sampling in dance music. It’s certainly one of the most techno tracks that McAuley has released, riding a relentless yet understated groove with constant thrust while weaving the atmospherics and incidentals in and out of the fray.

“Razz” comes in sharp from the get-go, as the piercing tone of the synth blares out a fearlessly major melody leaving it impossible to guess where the track might head from that point, but you half expect some kind of dramatic drop-out into an entirely different mood. Instead, a barrage of toms come tumbling into the mix and a propulsive and utterly unhinged rave monster is let out of its cage, all the cheeriness of the lead synth underpinned by distorted samples speaking in electronically manipulated tongues. Never has a beat sounded so desperate to leap out of the blocks as the one that rips in after the breakdown, made all the more visceral by the live quality to the drums, and it’s records like this that give you a chance to appreciate just how pivotal beats are to Pangaea. While his melodic content has always shaped the way people appreciate his music, McAuley’s drum programming, choice of samples and ability to mix them well has often been the element that makes his output so memorable.

What stands out on this EP is that there’s a greater flexibility in the tracks, constructed as they are with a little more regimentation than a lot of previous Pangaea productions. While far from playing it safe, it will be interesting to see how far this record reaches with its limber mixability. One thing’s for certain though, this new label can only mean more of Pangaea, which can only be a good thing.