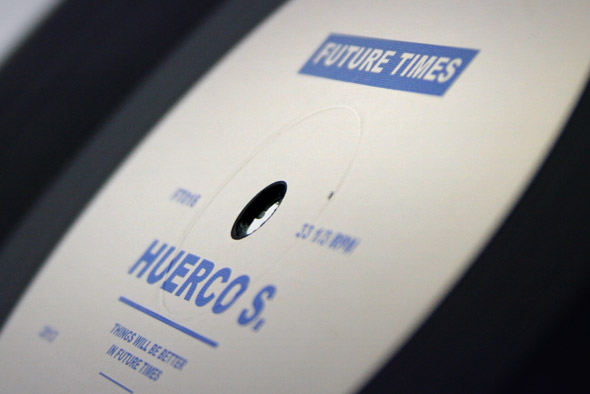 In the UK corner there was the small matter of Viaduct, the first plate from Hessle Audio’s Pangaea on his new oceanic zone referencing Hadal imprint, which brandished a triplet of productions that perhaps demonstrated a greater sense of flexibility than some of his previous output without losing any of the beguiling aspects that make a Pangaea cut so special. Houndstooth’s latest release of what’s turning into a dizzying first year of business was similarly impressive, with Δkkord further demonstrating their capacity for dynamic sound design and a willingness to traverse calmer waters on the four pronged Navigate EP.

Moving into murkier territory, the elusive Brothers imprint resurfaced with their long promised second transmission which was a slight shift downwards in the ear bashing stakes, but nonetheless continued the label’s efforts to canvas UK techno’s all-embracing reach of industrial and experimental styles. Perc and Sync 24 became AW\\PB and Cassegrain AT\\HE with both contributions skirting furtively between raw and steroid-injected electro and pulsating club techno. Similarly minded was the latest transmission from Inner Surface, with label bods AnD featuring alongside Truss, Sunil Sharpe and Ascion. The names alone should give you an idea of what to expect and the latter’s contribution, “Narrow Alley”, was a notable highlight coming across like a tubular, twisted and repitched industrial version of Jeff Mills’ “The Bells”.

The hotly tipped Vester Koza followed up his celebrated debut release with Out Of The Blue, a new 12″ that once again demonstrated his talent for finely measured productions that fit sungly between house and techno, encouraging further comparisons with ‘The Boss’ Kassem Mosse, as well as a hint of XDB. Also returning was Iueke, the veteran French producer and co-founder of Antinote, whose new 12″ draws from the same pool of rediscovered material from the 80s as that illuminating debut Tapes. Comprised of just one long form track, “Alecot” unfurls over 22 minutes like the precursor to one of Actress’ most engaging techno productions.

Those craving something a bit more immediate can find solace in two of electronic music’s most enduring and rewarding characters. Mike Kivits donned the Aardvarck title for another nostalgic trip through rave-inspired breakbeat techno for Rush Hour’s No Label operation, whilst MMM’s Michael Fiedler dropped the hot Fiedel plate Trinidad. Shout out to Unknown To The Unknown for their latest example of simple label mathematics this week, pairing a 1992 rave classic with remixes from Capracara and Marquis Hawkes.

Across the pond, the newly formed Montreal label, Forbidden Planet, delivered a sublime debut offering with Juno Plus favourite D’Marc Cantu at the helm. Arriving with some cover art every bit as impressive as the Chasing Voices releases, Some Fantasies Are Good, paired three original productions from the Jakbeat pioneer with a remix from DVS1. New labels launch all the time, but Forbidden Planet look like they have a strong idea of where they want to go. Having been beset by countless pressing plant issues, the long awaited Future Times debut of Huerco S finally arrived, and despite all the misfortunes the label faced trying to release the wonderfully sludgy Apheleia’s Theme, now might be the perfect time given the Kansas City producer’s rising standing.

Permanent Vacation returned from a brief holiday with a wonderful retrospective of material Phillip Lauer and Christian BeiBwenger released on the Brontosaurus label – real proto-Robert Johnson material across the eight tracks. The umbrella of labels that includes Emotional Response and Emotional Rescue now extends to Emotional Relish with a EP from Headman heralding the new label. Titled simply Noise, the Relish boss has a little help from friends Scott Fraser and Douglas McCarthy of Nitzer Ebb fame and is the latest example of a growing New Beat revival. A third London Housing Trust release, more archival Flugel material on Running Back and a superb Octa Octa LP on 100% Silk demonstrate the current diversity of what’s classed as deep house right now.

Those seeking a more esoteric fare were well stocked with Fences, the long awaited second album from Dial poster boy John Roberts. It’s arrival showcased a further refinement on the combination of sound design, sample research and contemporary club music that the producer has offered glimpses of over the past two years. Complementing this was Forget The Pink Elephant – a typically charming blend of kooky sampling and backyard sound design from Dwig on his debut full length for the Giegling imprint – and Filtered Water, a return to Type for New England sonic adventurer Geoff Mullen that drew from field recordings, feedback and tape collage to create a deeply immersive sound environment.