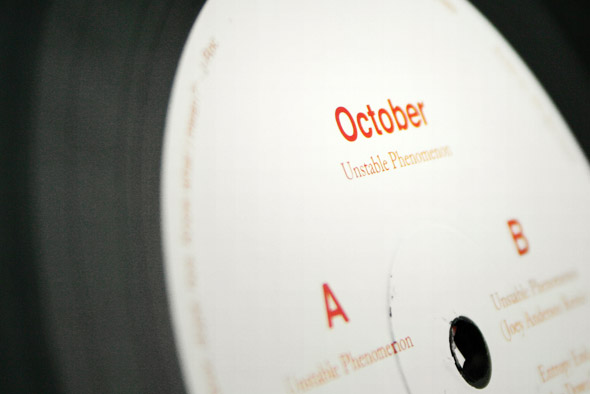 2012 was undoubtedly one of Julian Smith’s busiest years to date. His October moniker graced records for a dizzying array of high-end labels, from Skudge and Apple Pips to Aus and Simple, not to mention his own TANSTAAFL imprint. Interestingly if not entirely surprisingly, all those labels shared some kind of commonality, all dealing in the strange and mysterious corners of contemporary electronic music with a euro-centric focus. Now Smith’s first solo release proper of 2013 sees a move away from neighbouring turf to instead link up with the Brooklyn-based Voodoo Down crew, a whole ocean away from any familiar stomping ground.

The first question of the impact of such a move would of course be pointed at the music contained within the Unstable Phenomenon 12”, and it’s reassuring to know in an instant that the sound of October remains intact and untarnished. Actually, rather than untarnished, it should be celebrated that the scuffs and smudges that have always permeated his work remain. The results once again carefully coaxed from that signal chain are undeniably his, and on “Unstable Phenomenon” you can hear the wow and flutter of synths and samples vibrating with equipment idiosyncrasies and long-form effects jockeying across the dynamic range. There’s also a healthy amount of starlit wonder in the optimistic chord pulses and their accompanying harmonies, helped no end by cosmic swooshes of reverb and delay in the appropriate spaces in between. What is noticeable here is a greater sense of urgency in the drums, tapping into some unquantifiable energy in the jagged snaps and cracks of beat that propels the whole psychedelic melee forwards with purpose.

“Entropy Ends” is a more overtly oddball construction, dropping disembodied snatches of vocal against darting melodic twitches and occasional trills of DX7 organ before melting into aqueous hinterlands and reforming in an entirely other place. Far from linear, there is a swerving and careering nature to tracks such as these that constantly delights the mind just as it confuses it. Huge swells of overloaded effects blind everything else in the mix, unexpected synth patterns take to the fore, and the beat will forsake you just for the sheer hell of it. Through all that though, there is a rhythm section you can count on, not least in the subby kicks where there remains a beating heart to this track that keeps those wayward sonic spirits on course. In that sense it makes the most fearsome of tricks to hold in a record bag, dependable enough to play but insane enough to make or break a crowd.

The second half of the record is given over to remixes, with a kindred spirit in the shape of Joey Anderson stepping up to rework “Unstable Phenomenon”. Early evidence from his Deconstruct and Until My Heart Stops releases have pointed to an equally wild nature to that of October’s, of course not forgetting the ability to channel that freakish instinct to a soulful end. His version stalks under a cloak of nocturnal seduction, using a simple beat to permeate the foreground, while getting intricate with spectral wisps of melodic hum that hang behind the drums. The Voodoo Down crew themselves get busy smoothing out “Entropy Ends”, honing the more ranging elements into a steadfast and seductive deep house concoction that drowns in looming swells of pads as occasional snatches of the original comes drifting in and out of the mix and steadily working towards a thrilling climax full of tense dub-chord rubs and sinister tinkles at the top of the frequency range.

At every turn this is a record that celebrates the approach of the non-conformist, which is of course a stance October has built his career to date on. In that sense Voodoo Down makes a logical ally, both in their curatorial choices and their own creative impulses. For an intoxicating blend of otherworldly house music, you need look no further.