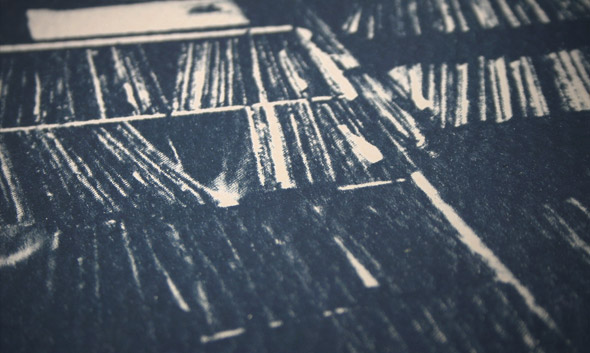 There’s no denying that bells and otherworldliness go way back. Christians used them for centuries to ward off evil spirits during thunderstorms, Buddhists host regular festivals where ringing them summons and placates the dead; Pagans clang them around with the belief that they give birth to form through vibration, whatever that means. So, while it’s slightly surprising that the Bells EP from Punch Drunk Records label head Peverelist and fellow Bristolian Hodge doesn’t actually have many bells in it, maybe the title is meant to be interpreted more loosely. After all, one characteristic that all those aforementioned cultures share is the belief that bells are instruments of transition: signals that transition the brain from day-to-day routine into a spiritually connected frame of mind.

In that sense, Bells succeeds quite effortlessly as a thoughtful proto-house track that gets you to re-conceptualize your surroundings. Packaged as two mixes – the functional but by no means clean-cut “System Mix”, and the dreamily effervescent “Dream Sequence”, it’s a track that demands a concentrated, focused listen to fully enjoy, whether surrounded by a mess of sweaty bodies or home alone.

It’s also a record that sees both artists catering to each other’s talents. Hodge’s work on the debut Outboxx LP earlier this year showed how comfortably he could weave in and out of pop and dance frameworks, But Outboxx’s strongest moments were generated on tracks like the barely-keeping-it-together “Withdrawl”, which employed crunchily compressed filter sweeps and ambient piano lines that made the track feel like it was a rapidly unfurling sweater, barely held together at the seams. On the other side of the spectrum, Pev’s last outing with Kowton on Hessle sounded like two guys taking on a substantial home construction project under the influence of mind-altering substances. If ‘working class techno’ has become cemented as a genre-description, than maybe that record could be accurately described as ‘contractor dub’, or ‘renovation-step’, considering the rapid hammer-like percussion of “Raw Code” or the hair singing buzz-saw sparseness of “Junked”.

“Bells (System Mix)” finds both artists meeting each other halfway. Even the most unhinged moments are still reigned in compared to Pev’s previous work, and his accommodation to Hodge’s more ambient-leaning side gives both mixes a nice solid cohesive feeling. While the track lurches forward with an intermittent scraping metallic bassline, there’s an unhurried, spacey dub vibe to it, and despite a chugging drum machine keeping time, neither Pev nor Hodge are in any hurry to over-extend themselves here. If there’s one weakness to the track, perhaps it’s that the peak moments arrive and depart before you can realize they were there in the first place. Still, while much sparser than 2013’s other Punch Drunk Records offering (Zhou’s drunkenly busy “Locust Tree”), the allusion to sound systems in the title of the track suggests that this one might be best played out over some sub-heavy speakers to fully gleam appreciation for the cut.

The accompanying “Bells (Dream Sequence) is an apt title for the more opaque interpolation, beginning as a squiggly mess of fragile synth pulses floating overtop a track-anchoring house thud. Though more melancholy than its predecessor, there’s something deeply fulfilling about the intermittent hi-end drum machines that cut in and out of the track, while a pitched down clattering hangs heavy in the sub-frequencies – it could be some mutated variation of an actual bell sound, but it’s still so obscured that it’s impossible to tell.

Where the “System Mix” of Bells was elusive with its build-up, “Dream Sequence” slowly prods its way towards a fully fleshed out climax – at five minutes in, the track’s drum machine takes on a surprising urgency as synth notes flutter and waver – a surprisingly fully fleshed out product from something that begins as little more than whispers; and a track that–bells or not–stirs at something deep down in the primordial subconscious, even if it’s just the urge to get up and dance.