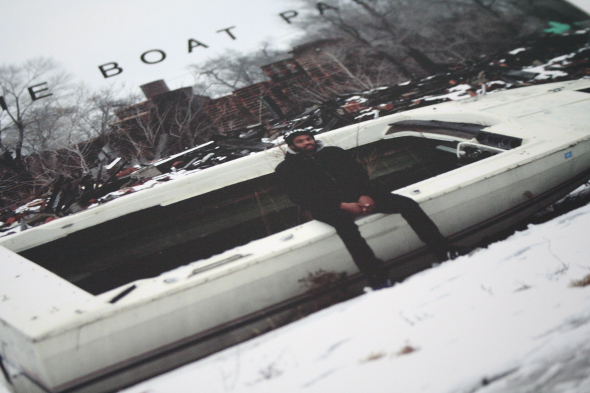 The much referenced mid-20th century decline of Detroit has never failed to provide the rest of the world with a scintillating yet decadent portrayal of excess and misery, and at times the music featured on The Boat Party feels like Kyle Hall’s reaction to this. Detroit’s young and gifted techno knight has conjured a fuzzy, distorted collage of sounds which closely represent our global state of affairs: a disconcerting and confusing assemblage of wealth and poverty, consumerism and decay – a continuously more blurred prospect.

The individual components of the eight tracks sound like the remnants of a forgotten dynasty, or better yet, a gritty heap of scrap metal which Hall has rounded up and beautifully recycled as a manifestation against the proponents of abundance and our insatiable thirst for the next big thing. Whereas many full-length works seem to follow some form of continuity or planned progression throughout their course, The Boat Party feels like a muddied and chaotic overflow of sonic delight.

In fact, it’s the LP’s neglect of serenity and linear development which make it stand-out from the mass, and moreover Hall’s refusal to adhere to the universally certified ‘album’ formula. It wouldn’t make much difference if the jagged, half-beat hooks of “KIXCLAP$CHORD$NHAT$” – a rather minimalistic description of the track’s creative sequences of melodies and percussion twists – were at the start or the mid point of the album, given the spontaneity and sheer energy of the music within. The same goes for most of the content and to this writer, The Boat Party sounds as if Hall is applying a meticulous approach to his work together with a light hearted frame of mind. “Grungy Gloops” feels barely held together by a cascading flux of teeth-shattering echo-snares, and exudes the sensation Hall had oodles of fun making it thanks to the charmingly improvisational characteristic to its almost non-existent arrangement.

This is precisely the sort of mentality we’ve come to expect from Detroit’s heritage, a wonderful place where experimentation and musical sensibility are embraced equally, something that is particularly prominent on The Boat Party’s final track “Measure2Measure”. Here Hall indulges in a bittersweet concoction of winding female vocal samples and almost exceedingly hissing hi-hats – a clear nudge to the inherent spontaneity of the analogue manifesto.

What’s most vivid on this album is Hall’s reluctance to stick to one tempo or genre, instead choosing to work through numerous slants on the ever foggier lines between house and techno and the sketchy electronic ad-lib that lies between them – a crucial constituent of his ‘junk techno’ approach on The Boat Party. Two of the album’s wackiest moments are undoubtedly “Flemmenup” and “Finnapop”, and could only loosely be considered part of the house-techno gene-pool thanks to their beat-laden DNA, something which is progressively torn-up and spat-out by Hall’s inventive yet minimalistic arrangements. On the former, KMFH opts for a lo-fi approach, where his insistent drum hits roll up and down to create devastating artillery of beats, whilst the latter spins the booty house flex on its head thanks to a relentless kick-roll and a myriad of more contemporary FX trickery.

But it’s also the more grounded chapters of The Boat Party which embed Hall’s skills as a vital cog in maintaining and developing Detroit’s rich techno heritage. Admittedly, the aggressive stomp of “Dr Crunch” lends it an element of pure madness, but it retains enough musical rationale to satisfy all sorts of listeners. The pleasing shuffle of sporadic, distorted kicks and watery synths that characterise “Spoof” make it notably straighter than the majority of the album but it too contains a successful balance of soulfulness and unpredictability. Together with “Crushed”, a funky and sample-fuelled beat-workout, these three tracks represent Hall’s ingenious take on his city’s legacy and a remarkable insight into the use and misuse of music.