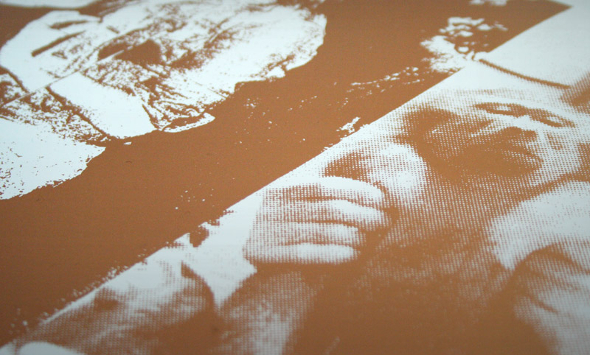 In 1982 Juan Atkins and Rick Davis as Cybrotron produced what’s credited as the first real electro track: “Clear”. In the same year a burgeoning industrial and experimental-noise band, Nocturnal Emissions, were producing something equally antecedent – yet musically unkempt in comparison. The Accumulator EP was first conceived a lifetime ago – 31 years to be exact – and it’s since found a way into the hands of Paul Purgas – one half of Emptyset – and his label We Can Elude Control. Purgas’ take on the release comes as a three-track EP, with an additional 23 minute live recording of Nocturnal Emissions playing the Brixton Ritzy on June 9th, 1983.

Thatcherism had just tightened its grip on already frugal Britain and this three-dimensional recording is a traversable wormhole into demonstrative, south-London summer’s night. The band’s Ritzy performance – played only a stones throw from Atlantic Road, the site where two years before Nocturnal Emissions played in a railway arch at the height of the 1981 Brixton Riots – was in demonstration of Margaret Thatcher’s “catastrophic” re-election to office. As the (then) three piece Nocturnal Emissions played, layered excerpts from the band’s 16mm film, The Foetal Grave of Progress, were projected over a live TV broadcast of the election result.

The Accumulator 12″ itself features two versions of the title track. The first, “Accumulator 1”, is stripped of drums and low-end for the first seven of its eight minutes, with the remaining movements flexed by a pulsing kick on the first beat of each remaining bar. Before any signs of bass, it’s an avant-garde excursion through a linear arrangement of subtle and drum machine percussive rim shots, reverberating claps, phantom machine buzz and mechanical whirr. By today’s standards, “Accumulator 2”, sounds as fresh – or retrospective – as the scuzzed-distortion and dancefloor constructs of L.I.E.S, Sex Tags Mania and Acido Records output. Combine this with a contemporary techno mindset of Orphx and (the now inactive) MPIA3 and the under produced rawness of Chevel, The Analogue Cops and Madteo; it’s like discovering Mr Scruff’s “Get a Move On” was a result of the classically misunderstood composer Moondog, and his Charlie Parker-inspired “Bird’s Lament”.

Also appearing on the release is a sequenced, but equally atmospheric “So Darn Hot”. Throughout the lucid 808 drum procession, momentary flickers of recognisable sound bytes pre-dating Planetary Assault Systems “Wriss”, or Shifted’s AVN #001 debut can be heard; metamorphosing, then disappearing as quickly as they form. All that’s missing from the B-side is Steve Coogan’s monologue as Tony Wilson in 24 Hour Party People explaining backward shows of nationalistic pride, the mountains of rubbish filling London’s west-end and the plight workers unions faced in 1980s Britain. Even the split-cover art – courtesy of Nocturnal Emissions’ own Nigel Ayers – depicting rubber-gloved scientists man-handling a sedated baboon and a denim-clad youth caught in a body moving bout of dance seems to remonstrate the UK’s social and economic unrest of the time.

In 2010 “empty symbolism” and “sloganeering” were the words Regis used to describe the political dimension in techno, while this year, Cabinet Office Minister Francis Maude, who oversaw Lady Thatcher’s funeral arrangements, said the campaign to place The Wizard Of Oz’s “Ding Dong! The Witch Is Dead” at the top of the pops was “extremely trivial”. It’s with a hint of irony then that Nocturnal Emissions’ politically driven and Thatcher-inspired Accumulator EP sounds as contemporary as the techno being made today, while underpinned by a similar narrative of a lifetime ago.