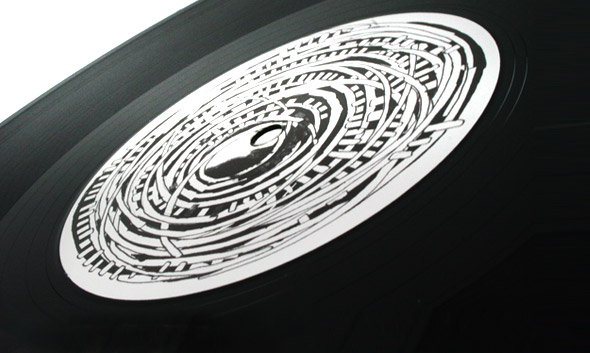 Only a few years ago, Other Heights was drifting silently about dub techno’s sparse and vapoury soundscapes, with Alteria Percepsyne, Herbstlaub and Ohrwert its ethereal beings. But in recent times Other Heights has made out-roads from ambient and echo space dub to a sound catering for the club environment, and their introductory CD pressings now fetch collector’s prices on the internet. The Belgian label’s affection toward the various artist release continues apace on their tenth vinyl offering which is in fact spread across three separate 12″ and features some twelve artists. Label head Jorn Kerschot opted for a simultaneous discharge of all three EPs – deciding against a staggered release schedule or bundle package.

The series canvases the label’s broad, yet defined sound and is opened by Gaust, another hidden act Kerschot lured from the dub techno deep. It’s the first track from the yet to be identified newcomer and “Vacant Depth” introduces the series with some cool and effervescent ambience, setting the mood for filtered beats to softly thump in syncopated time next to steel-panned drums played like wind chimes. It harks back to the label’s earlier music and once again highlights Kerschot’s openness to embrace new and undiscovered sounds.

The only instantly recognisable artist to appear on EP I /III, is Russian techno producer Unbalance. He supplies “Wandering Soul”, a track which sounds like Richie Hawtin’s “Spastik” being sucked down the kitchen sink. Along with the aforementioned Gaust, this first plate is rounded out by the Swedish-styled techno of Pehr Genlogue and Kretipleti. Both these artists debuted on the Swedish and predominately digital label Kant Recordings, and here their respective productions in the drum machine driven “Decadent City” and alarm-tinged “Freadsinit” set the varied tone for what follows.

The second of these three EPs groups together the most prestigious selection of artists with an excellent Brooks Mosher production complemented by Other Heights debuts from We Play House artist Metrobox, Tom Dicicco and Markus Suckut. It makes sense for Mosher to make an appearance here with  “Lost Signal”, which effortlessly skirts between dub techno and acid house, as the American’s appearance on a 2010 Other Heights release alongside the then unknown Szare and Helix lead to a career resurrection that’s seen two EPs signed by Steffi’s Dolly label.

Both Dicicco and Suckut have enjoyed similar rates of success since plunging into the deeper end of techno in 2010 and Dicicco maintains his command of spacious dub with “Planet Router”. Rampant drum sequences flutter and scuttle the tracks introduction amidst textural modulations of cloud shaping synths that coalesce into a vaporous and sustained climax of chasmal techno. Suckut however, deviates from blanket reverb and echo beats, keeping his acid flanged “2QMT59” stripped and beat-down with a rhythmic permeance similar to loopy Skudge minimalisms. Metrobox’s ravey “Monetics” closes out EP II / III with heavy struck keys and chordal dissonance often heard in DJ Sprinkles’ productions, with this particular track sharing similarities to Thaemlitz’s remix of Adultnapper’s “Low Point On High Ground”.

The final disc opens with J.Tijn’s “Three 0 Freedom”, the UK artist’s first solo production following remixes for Turbo and Blood Music and is his most accomplished production yet, with a frenetic flurry of acid tip drums and prototypical Detroitisms. Recently given the honour of inaugurating Jack ‘Untold’ Dunning’s raw techno imprint Pennyroyal, J. Tijn’s star is evidently on the rise.The unheralded Myztical keeps it on a Detroit tip with the slanted beat down of “Summer ’91” notable for an electrifying bassline that sounds like an out of control cattle prod.

Along with the Meanwhile and Silent Season imprints, Other Heights belongs to an island of dub focussed and ambient treading labels that have built their reputation from floating new and uncharted sounds. While some names to appear across this triple vinyl release may be more known than what they were previously, Jorn Kerschot remains ulterior in his unearthing abilities and provides a smorgasbord of new music and artists rather than mere single 12” platters.