Willie Burns – Run From The Sunset 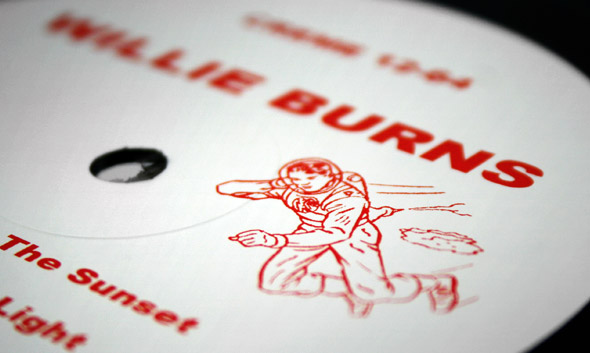 Great music is more about the ideas than the expertise with which they are executed. It’s no exaggeration to say that Willie ‘Burns’ Burnett has some great ideas, arrived at by accident than design. It helps that the general environment he operates in welcomes inspired ideas borne out of happy coincidence and a willingness to engage in a never ending guessing game. In that regard, Burns is staying true to house and techno form, following in a tradition that dates back to Phuture’s earliest experiments with the 303. Coupled with this approach is Burns’ willingness to apply the KISS principle – ‘keep it simple, stupid’ – to his ideas and concepts.

It’s audible on his Overlord release for The Trilogy Tapes last year and on his more recent record, Another Place, Another Time for Sequencias. In both instances, simplistic, almost puerile riffs and straightforward rhythm tracks prevail, with the Sequencias record sounding only marginally more conventional than the ‘ardkore sample sucked backwards through a vortex’ that constitutes the central riff on the title track of that aforementioned The Trilogy Tapes release.

For his latest turn, Burns revisits this approach, supplanting sources from the hardcore era with a synth line appropriated from classic Larry Heard-style deep house. Unlike the legion of producers trying to emulate this sound, Burns’ interpretation is refreshingly off, the atmospheric sounds nudging in and out of tune, jumping up a few octaves before sliding back down again. Yet despite this trickery, he loses none of the wide-eyed innocence and sense of wonder that material from that era elicited.

This feeling is also present on “No Answer”; the bass is spine-tinglingly ecstatic, reminiscent of vintage Metro Area. Coupled with the electronic pulses and blips that surround it, Burns creates a euphoric groove that borders on the naïve. He displays a somewhat different approach on “Run from the Sunset’ and “Touch the Light’. On both tracks, rough beats provide the basis for his ideas; on the former it’s featherlight pads and evocative piano lines that coalesce in a dreamy mush, on the latter it’s an insistent chord riff, distilled to a trancey stab and looped to infinity that prevails. Irrespective of moods, it’s clear that Burns remains first and foremost, an ideas man.

A1. Pong In A Tracksuit
A2. No Answer
B1. Run From The Sunset
B2. Touch The Light