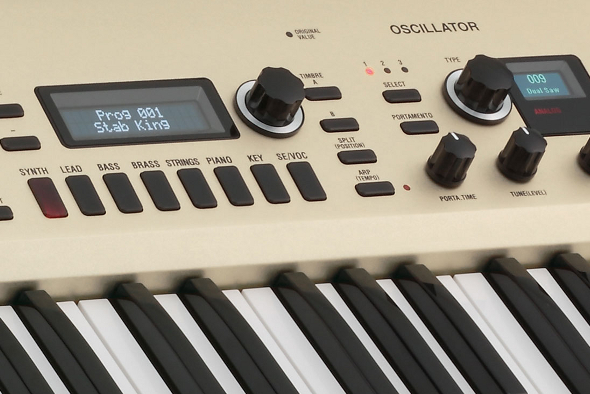 Whilst Korg crown their latest synthesizer, Juno Plus is tasked with discovering how its royal duties are being carried out.

Korg have come a long way since their humble beginnings, designing rudimentary drum machines in 1960s Japan. Their MS-20 analogue synth has gained cult status amongst vintage gear acolytes, prompting them to create a miniaturised version which is set for imminent release. The M1 synthesizer was a worldwide hit as the 80s turned into the 90s. They have recently had another hit with the well respected SV1 digital piano and even more recently with the Kronos workstation. So where does the KingKorg fit into this long and revered family tree? At first glance it doesn’t seem to suit the super high end finish of the SV1 or the Kronos, rather finding its place amongst Korg’s series of affordable synthesizers such as the MicroKorg, X50, Monotribe and the hotly anticipated Volca series.

The KingKorg is perhaps the largest of the Korg synths in its class, with only the X50 sharing its 61 keys. It has a velocity sensitive, semi-weighted, full size keyboard, and a variable key response ranging from shallow to deep, while there is a joystick control instead of the more traditional pitch and modulation wheels, which is akin to the kind of control that was found on the classic M1. The front panel presents an array of knobs, buttons and push encoders with an OLED display in line with its analogue modelling credentials.

The unit also has a full compliment of connection possibilities with stereo 1/4” TRS ports to output the main sound, with a 3.5mm headphone jack socket on the front, DC12V power input, switch pedal and damper pedal connections with MIDI in/out and through, as well as CV/Gate outs that can be used to allow other Korg units such as the Monotribe or the new MS20 mini to benefit from the KingKorg’s 61 note keyboard. The final piece of the jigsaw comes in the form of a USB connection that helps you hook this synth up to a Mac or PC for use in your DAW of choice, or to connect to the free library software that is available to download from Korg’s website that gives you the option of modifying or storing sounds for later use. 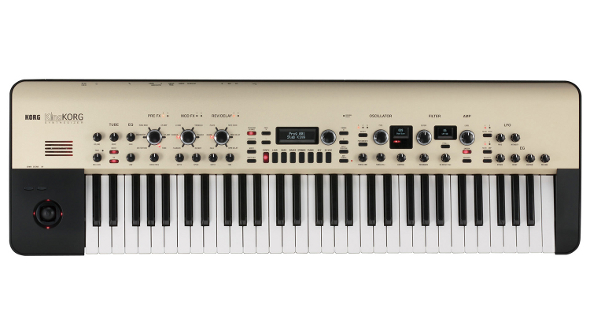 As an analogue modelling synth, the KingKorg doesn’t feature real analogue circuitry, but rather attempts to recreate the sound of analogue using digital processing, which is sometimes referred to as VA, or virtual analogue. Included in the KingKorg are 200 preset patches with space for 100 user patches, which for ease of browsing are organised into eight categories with a dedicated button for each. The menu can be navigated using page buttons and a large knob logically placed next to the OLED with a shift/exit button that allows the user to access any secondary features on the front panel.

The modelling possibilities offered on the KingKorg are extensive to say the least. There are three virtual analogue oscillators for each timbre (named as timbre A or B) on the KingKorg, with the possibility of layering both timbres together, making a total of six oscillators to create full and rich textures. Each oscillator gives you the choice of 126 different wave forms and samples to combine, giving you the freedom to mix classic analogue tones such as saw, sine, triangle or square with piano tones or digital bass source sounds to name just a few. There is an ADSR controlled by four knobs that doubles for command of the amplifier and filter envelopes; not as preferable as separate ADSRs perhaps, but still a workable solution.

“Nonetheless, the KingKorg is a powerful tool for sound design, and with its comprehensive selection of 126 basic wave forms and a virtual patching system, there is very little that can’t be imagined into reality with this synthesizer.”

The filter section meanwhile offers you the choice of 18 virtual filter types, including a model of the highly regarded MS-20 filter, with control over the cutoff, resonance and envelope gain intensity, which also doubles as the keyboard tracking control when the shift button is depressed. The LFO controls the frequency and intensity of filter or pitch modulation with the intensity control knob notched at the 12 o’clock position, allowing you to program gently undulating or fierce stuttering filter effects to screaming, siren like pitch effects. Gliding sounds can be implemented using the portamento knob that gives you mastery over the glide rate.

There is also an all inclusive arpeggiator with tempo control, instigated by holding the shift button and turning the browse knob or, if the situation demands, holding the shift button and transforming the arpeggiator button into a tap tempo control, with the BPM clearly indicated on the OLED. Further options can be found in the pages of the menu, making it possible to change the direction of the arpeggiator between up, down, with two alternatives, random pattern and trigger mode. If that’s not complete enough then you can find a fully programmable step arpeggiator to boot. In terms of synthesis, there is plenty here to get your teeth into whether you are a beginner who is tweaking the plentiful, if somewhat underwhelming, preset patches, or an experienced sound designer, taking full advantage of the tactile, hands-on control offered.

Coming from the synthesizer range that includes the microKorg amongst its number, it would be safe to assume that the KingKorg has inherited some features from its underlings. As such, we find that it has an additional vocoder function that can be invoked by hooking up a microphone, such as a trusty SM58, into the XLR socket on the rear panel. The microphone level can be adjusted using its own dedicated knob situated right under the master volume on the front face. After knocking the vocoder mode into the ‘on’ position, you turn the entire machine into a 16 band vocoder with formant hold and shift possibilities. As with all talk boxes and vocoders, you have to choose your signal sound carefully as some work better than others; it also takes a bit of practice to get used to making the vowel sounds, but if you’re impatient, you can always use patches 196-199 to get you up and running.

Once you have explored this synth’s initial sound design possibilities you can turn your attention to its well stocked FX section, which features three effect types, each offering six choices in the chosen section, all implemented by a push encoder. The selection of pre FX features six different kinds of drive and distortion tones with a single drive/frequency knob manipulating the sound depending on the type of effect being implemented. Mod FX give you modulation tools such as flange, chorus and a rotary speaker with depth and speed knobs. There is also a reverb and delay section offering rooms, plates, halls, tape echo and a BPM driven delay that takes its cue from the arpeggiator tempo control and is edited in the same way. Finally, to top off the entire signal path, there is a two band EQ and a tube drive to further enhance your sound. The KingKorg’s sound capabilities are so vast, that for example, both A and B timbres can use this effects section in isolation, making it possible to have a driven sub bass with a hi percussive sound swimming in reverb or delay at the same time. Although this plethora of options might sound difficult to keep track of, the OLED offers clarity in the form of visual feedback.

The KingKorg is a virtual analogue synth in the same vein as synths such as Nord Lead, Novation Supernova, Access Virus and synths in the Waldorf line. It’s a good synth for beginners that want to enter the world of subtractive synthesis, but it’s equally as suited to more advanced users that have the option of getting right under the bonnet of this feature packed model. If there is a complaint to be levelled at this unit, it is that there is a slight air of flimsiness around it; a lot of the knobs are quite wobbly and the chassis itself feels like it could crack easily if knocked. To its credit, it is extremely light for a 61 note synthesizer, and busy live players will be thankful of that, if it survives being thrown up on, and down from, stages long enough for that appreciation to take hold. Nonetheless, the KingKorg is a powerful tool for sound design, and with its comprehensive selection of 126 basic wave forms and a virtual patching system, there is very little that can’t be imagined into reality with this synthesizer.