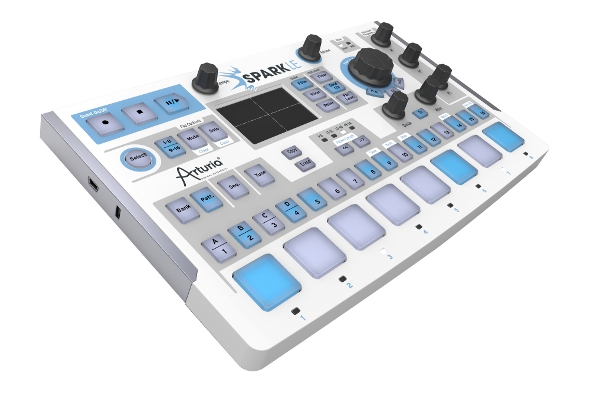 Released in 2011, Arturia’s Spark drum machine took Arturia’s longstanding experience as a soft synth developer and combined it with a hardware controller, giving all the tactile control of a traditional beat box but with the added power and flexibility delivered through your computer. Despite the already competitive price point of the original unit, Arturia have now released a stripped down version of the Spark, named, appropriately enough, the SparkLE.

In this light edition of their flagship hybrid, Arturia have slimmed the unit’s profile down by doing away with the MIDI I/O ports and using a single USB connection to supply bus power. The redesigned face has done away with a lot of dedicated knobs in favour of a more efficient layout, though there are still eight pads with the same loop functions, XY pad, global and instrument FX, volume and tempo controls, as well as the large push encoder for browsing, and the all-important step sequence buttons, only this time there are only three assignable knobs. The main muscle comes from the Spark drum machine software, which can act as a stand-alone program or be wired into DAWs such as Logic Studio, Pro-Tools or Ableton Live. 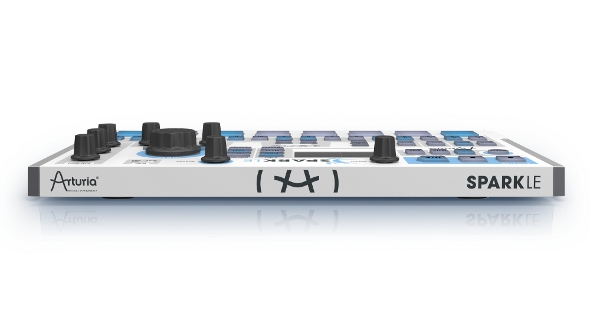 In a lot of ways the SparkLE is a more efficient and familiar design than its slightly awkward and cumbersome looking brother. This time the step sequence program buttons are located above the performance pads on the lower half of the unit, making it look a lot more like the classic beat boxes of yesteryear; this new layout makes much more sense as it lends itself to a more intuitive approach to beat making. In fact, anyone used to programming one of Roland’s old TR-808 machines, or one of Akai’s MPCs will be able to pretty much dive straight into a production session; a very good thing considering the manual only covers the software installation and the more basic functions of the unit, along with instructions on how to open Spark in your DAW of choice.

Visual feedback from the unit comes from the backlit buttons that turn blue when they are in operation, and as the hardware is integrated tightly with its software, whatever happens on the hardware is also shown on the computer screen. Unfortunately you cannot completely ignore your monitor, for example, when you are browsing a new project, kit or instrument, the information is only displayed in the virtual display on the software version. This comes as no surprise though as the software has a lot more features than first meets the eye.

“The fun factor involved with using this hybrid drum machine is high, and its compact, tough and portable chassis lends itself to being taken out on the road.”

Navigating the software itself is simple, although not everything can be controlled from the hardware. You are required to pick up your mouse to switch to the lower screen set which allows you to browse the three types of sounds found in the library; TAE (True Analogue Emulation), which includes plenty of classic analogue drum machines, Digital Sampling, which features multi-layered sounds and allows you to import your own audio for use, and finally Physical Modelling, which allows you to take complete control over more organic sounds. It’s not just drum sounds either; it’s also possible to play and program tuned instruments in the SparkLE, where you can also find a series of synth libraries. Each pad is assigned to a channel in the mixer section which also features simple FX such as compression and EQ, as well as two auxiliary sends that can be automated, allowing you to get fairly involved in mixing your creations.

The middle screen is a full representation of the hardware controller except for the swing function and song toggle which unfortunately can only be accessed from the software. Not being able to access the song toggle isn’t really a huge loss as it can be one of those controls that gets easily knocked by accident, but it would have been useful to have had access to swing on the hardware controller. The upper section meanwhile shows a representation of the sequences that have been programmed and it’s possible to edit these sequences on the computer if you do so wish. It’s also in this section that you can string your patterns into songs of up to 64 patterns each and edit the program preferences. 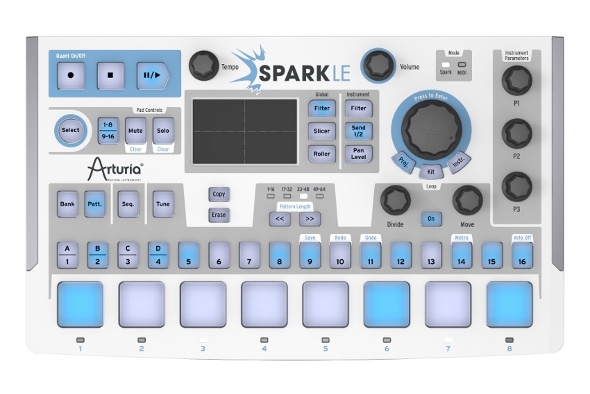 The work flow of the SparkLE is both gratifying and fast. You can step write anything up to 64 events per sequence, or, if you prefer, you can record them by playing the velocity and pressure sensitive performance pads. These eight pads can be doubled by the press of a single button giving you sixteen sounds per bank, and each sound can be muted or put into solo mode using the ubiquitous select control. Sound effects meanwhile are split into two categories: those that will affect the global mix of your pattern, and those that will affect the selected pad/sound. Filter, slicer and roll feature in the global half whereas pan/volume and send (along with a dedicated filter) feature in the single instrument half.

All of these are controlled by the XY pad, which unfortunately is really a little too small to be used with any confidence, and although it’s possible to record any automation into your pattern it feels like using the three assignable knobs is a more precise way of getting what you need; holding down the select button, whilst turning any of the knobs, allows you to change the parameter that is being manipulated. Along with a moveable looper, the jamming possibilities of the SparkLE are surprisingly substantial, although one of the drawbacks of this cut down design is that you can’t invoke the slicer and filter at the same time.

The fun factor involved with using this hybrid drum machine is high, and its compact, tough and portable chassis lends itself to being taken out on the road. However, there are a few drawbacks to its design. The knobs feel wobbly which makes the whole unit feel slightly cheap, while the small XY pad doesn’t help in this department either. The step sequence buttons also could use a little extra graphic information around them to facilitate step programming, if for example, you’re not familiar with how beats are subdivided. Also, in the handy tune mode you can actually play in melodic material from an instrument you may have loaded on to one pad. The step sequence buttons turn into a sort of mini keyboard but it’s difficult to ascertain what pitches you are programming.

After falling for the instant and intuitive workflow of the SparkLE you can’t help but wonder what it would be like if you could unhook the whole thing from your computer. Such an endeavour would make the unit very expensive and probably a lot larger, but you can’t help wishing for a machine that could save a number of banks and songs, have a larger XY pad, and come with MIDI ports for syncing with external keyboards and stereo outputs so that you could disconnect it from your computer to make it a truly stand-alone machine. The SparkLE is for people who need tactile control of their beat production and although Native Instruments Maschine and Akai Professional’s MPC Studio already fulfil this role to some extent, this unit comes in at a much more affordable price and offers some, if not all, of its competitors’ functionality. After spending time using the unit you can’t help but ask yourself if it is a piece of software with a hardware controller or a piece of hardware with some software to power it. Being a MIDI controller, the hardware can be used with any software that can support mapping. However, because any of the operations that the hardware controls can be completed using a mouse within the software this writer would reluctantly have to concede that it might be the former rather than the latter.