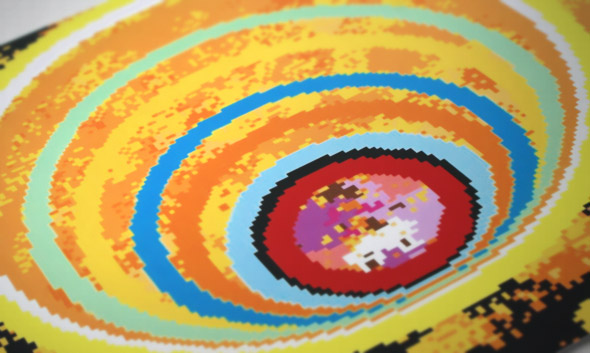 While it may be somewhat lazy to refer to Manchester as the Capital of the North, it’s true to say that people from cities like Leeds, Liverpool or Newcastle are more likely to up-sticks and relocate to London to find their musical fame and fortune. Miancunians are generally less intoxicated by the auspices of ‘The Big Smoke’ and this screw-London attitude has led to Manchester rivalling the capital as a melting pot of cultures and ideas, and is why the city is one of the birthplaces of the Acid House revolution, via the much eulogised Hacienda.

Press for the fledgling Red Laser label from Manchester informs you that their musical touchstones go further back than 88’s summer of love, residing instead in the late 70’s / early 80’s and the moment when the amphetamine charged rhythms of New York collided with the cocaine fuelled clubs of Lake Garda, giving life to a new form of music, now known as Italo Disco. Allegedly, the initial vision for Red Laser Records was to deal exclusively in reissuing rare and exclusive Italo. Perhaps doing the maths, Red Laser has instead looked to the rich local talent for inspiration with this third release from the distinctively named Ste Spandex, which is the proverbial “horse of another colour”.

Rapidly making a name from himself in his hometown as both a DJ, with the Wet Play parties, and as a producer with the affiliated Ruf Kutz label, Ste Spandex’s full debut for Red Laser is charmingly bi-polar in its influences, yet still oddly cohesive. The Italo is still there, but it’s wrapped up in everything from boogie, Bass Music, various generations of house, rare groove, 8 bit, Balearic and hip-hop. It’s the sublime “Piano V2” that immediately stands out, combining uplifting 90’s style piano house riffing, with some unbelievably over driven 808 sounds and syncopated drum patterns that border on hip house. On top of this we have a delayed-out diva-esque vocal sample which, along with the piano, has a softening effect on what is in essence a very tough, driving track.

“Big Fat Tuck” feels like a reconstruction of “Piano V2” but with the piano motif discarded. The samples are presented in a longer form and given more time to breath. The synth melody also evokes memories of the iconic Solar Records, although the drums are as equally in your face as on that cut on the B side. There’s a similar West Coast sheen to the synths and melodies of “Beatin My Time” too, although the drums have now taken a crisper and more rigid feel. The vocals, which still feel as though they may originate from the same source as the other slices on the record, are now given a treatment that wouldn’t sound out of place on a UK Garage track.

Over the course of all 3 tracks, Spandex manages to sway from sounding like Floating Points, to Zapp & Roger via a pitched down DJ Pierre, often all in the same track (and in some cases all at the same time). The effect should be disorientating, but not only does it work, it also lends the 3 track EP an air of boilerplate personality that is entirely evocative of the multifaceted city that has spawned it. The banana yellow vinyl and some MS Paint indebted artwork and design from Spandex himself serve to enhance the distinctive nature of this record further; Ste Spandex has delivered a record that retains it’s own personality, despite borrowing from so many others.