Dalhous – An Ambassador For Laing 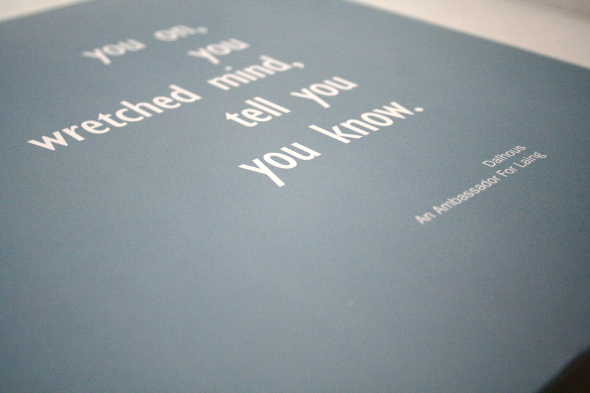 When Dalhous originally appeared on Blackest Ever Black in 2011 under the name Young Hunting, Scottish duo Marc Dall and Alex Ander stood out amongst the likes of Raime, Regis and Tropic of Cancer for their singular take on chamber pop. Heavily treating their string samples to create cinematic, baroque backdrops for their half sung narratives, The Night Of The Burning was an EP that created the distinct sensation of watching a satanic order performing a ritual sacrifice in a remote church somewhere in medieval Scotland; suffice it to say, it probably wasn’t to everyone’s taste, even amongst Blackest Ever Black’s more open-minded followers.

Resurfacing in 2012 with the Mitchell Heisman single under the newly formed Dalhous, the duo had undergone a significant transformation. Gone were the earnest vocals and bombastic orchestration of their Young Hunting material, and in their place was a recomposed version of their sound, fed through sampler plug-ins and mangled into something of a digital collage, driven forward with biting breakbeats that recalled the looser end of jungle, or the steely rhythms of 80s industrial pop.

This sound – which they continue to develop on An Ambassador For Laing – may not be as immediately striking as the one showcased as Young Hunting, but it does feel somewhat more mature; where their music was once almost cloyingly gothic and coated in angst, the sound of their debut album as Dalhous is considerably lighter. Although opener “He Was Human And Belongs With Humans” combines a rigid mechanical clatter with an ominous undercurrent of bass, its unusual, gleaming melodies seem drawn from the school of fellow Caledonian peers Boards Of Canada. Whether a conscious influence or not, it’s hard not to hear the lo-fi breakbeats and spiralling melodies of Music Has The Right To Children, but if anything, Dalhous’ textural approach is arguably considerably more complex, with the queasy drawl of radioactive tones replaced with a patchwork of sampled instrumentation.

Their combination of rigid, digital technique and vivid analogue resampling makes the music of Dalhous sound like an aural equivalent of classic stop motion animation, especially in the shorter vignette tracks; the looping piano of “Bolder And Lighter Than The Beat From A Wing” bristles up alongside timelapse of woodwind, the cracked ambience of “Who’s Here, You’re Here, I’m Here…” seems to move in a reduced framerate, while “A White, White Day” (not to mention many other tracks) simmer with monstrous animalistic snarls which mirror the sound of a chorus of Ray Harryhausen creations.

However, An Ambassador For Laing isn’t just a simple exercise in digital and acoustic recomposition and plunderphonics; barely feeling at all like a Blackest Ever Black album, it successfully creates a complex variety of impressionistic moods, standing out among the label’s more dense and oppressive offerings. Although tracks like the “Dalhous”, “The Cruel Practice Of Art” and “Dreamers Of Decadence” may seem on the surface like swamps of morbidity, lent a discordant air by the reversed samples grating against each other, their competing sounds actually create the reverse effect. Listening to the music of Dalhous is like looking through a decaying old negative held up to the sunlight; it casts unusually warm colours through the areas where, in reality, darkness should be soaking it up.