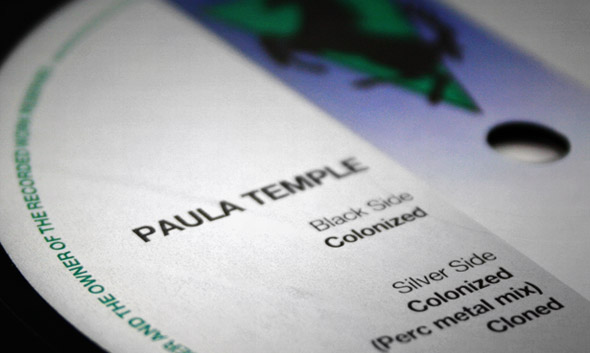 It’s time for a rewind. Back during the dark days of loop techno, Paula Temple stood out against the tide of one-note bores. Why? Because in 2002, she released The Speck of the Future on the Materials label. That may seem like a minor detail, but don’t forget that she was the only artist apart from owner Chris McCormack to release on the imprint and that the searing industrial fury of “Contact” was eventually licensed by Jeff Mills for his 2004 Exhibitionist mix.

In other words, just as the loop aesthetic veered ever closer to saturation point, Temple and McCormack pushed further and further in the opposite direction; neither producer wanted to engage in the process, but their refusal was expressed in different ways. The hugely talented McCormack put out the timeless, vocal-tinged There Are Better Waysalbum in 2001. Never a prolific artist, his output subsequently slowed to a trickle, with irregular releases on Materials and just a few months ago, a new self released album called A Million Other Earths.

Temple meanwhile, went in a different direction, working as Fragile X, Jaguar Woman and more recently launching the Noise Manifesto label and collaborating with Swiss producer Stefanie B as Spank Protest. In a sense, Temple’s debut on R&S Records is a continuation of her bloody-minded approach. The title track returns to slamming techno, but sees a “Mentasm” style bass farting and belching under slamming drums and screeching riffs. There’s a brief interlude where Temple veers into a dreamy reverie, but she’s quick to return to the pile driving drums and the track ends in a noisy haze.

Maintaining the connection to old school bass pressure, the digital only “Decolonization” calls up the ghosts of ragga’s past with a recoiling bass working its way through doubled up drums, a stuttering rhythm and percussive slivers scattered like seeds into a fallow field. The whole arrangement appears to flit in and out of time, albeit temporarily, adding to the sense of disorientation that the track already exudes. By contrast, “Cloned” is mellow; the break beats are lithe and understated – although they too appear to flit in and out of time – while a chopped up female vocal slurs away indistinctly, a prelude for the atmospheric synths that eventually sweep in.

While Temple has gone her own way, the ever-astute R&S have commissioned Perc to deliver remixes. His self styled digital only ‘Bubble’ remix is a relatively straightforward droning, stomping affair, but the ‘Metal’ version is a different proposition. Underpinned by broken beats and bolstered by layers of bombastic, grungy riffs, Perc stops and starts the track on numerous occasions, each break accompanied by the most hideously disturbing, noisy death screeches, sounds so extreme and yet life-affirming that even Temple is sure to approve.