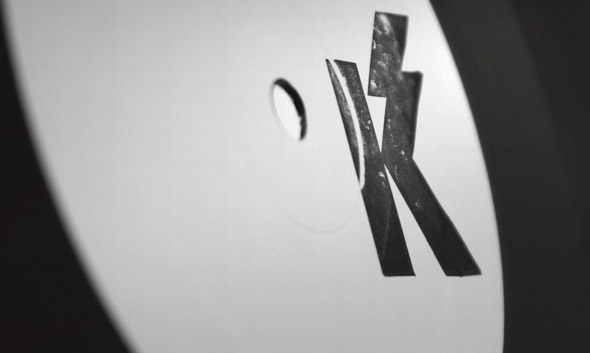 After the mind-flattening blow dealt by their debut appearance on Skudge White, Fishermen are back with another salvo of pitched-down brutalist techno for the undead dance at the end of the world. At least that’s how their clamouring concoctions feel, both on their first release and on this follow up for Kontra-Musik.

Between the intersection of Skudge, Kontra, and the Fishermen Martin Skogehall and Thomas Jaldemark (of MRSK and Donk Boys fame respectively), the movement behind this project creates a strong case for the health and vibrancy of the Swedish techno scene. That’s bolstered in no small part when you consider that the previous three Kontra-Limited releases formed the trilogy that helped catapult Frak onto the radar of the electronic music world after some twenty five years in isolation.

Where their first record was utterly conspicuous in its slackened tempo, the tracks on Delirium Tremens find Fishermen reaching the dizzy heights of 120 bpm in places, but still the sound palette remains rooted in heavy, industrial techno. This however is far removed from the monochrome monotony of your average Berghain bangers, instead displaying a fearsome grasp of texture and tone, unafraid to wield melody and still making the track pound mercilessly.

“Black Haze” perhaps demonstrates this point the most flamboyantly, coming on equally tough and sensitive at the same time. The sorrowful chords that permeate the track come from the lineage of haunting ambience that defined the likes of Selected Ambient Works II, but the intricate rhythm section brings on brutish kicks and rasping percussion that somehow falls with a delicacy and grace not often associated with such drums. The peak of the track lets the melodics fall away and replaces them with an unearthly growl of distorted malice, and yet still within this oppressive situation the imagination that has fed into the sound design of this particular synth brings with it a warmth and sense of adventure that so much formulaic techno is devoid of.

Still, “Black Haze” remains one of the more tender cuts on the record. “Port Strays” runs weighty, dub-powered drums over a broken refrain that feels no need to kick into a more driving rhythm, leaving it to a discordant chime to raise the bar in eeriness while expertly placed reverb and noise fill the space until your ears are gasping for breath. When the beat does finally budge half way through, a split second of relief is instantly dispelled as the intensity has merely switched stance and the pressure keeps on piling on.

Listening to “Six Pounders”, it does start to feel as though the jump-off point for Martin and Thomas may well have been the early pitch-black rave techno that the likes of Aphex Twin cut their teeth on. In the snarling acid and intricate drum arrangements you can feel the spirit of tracks like “Digeridoo” echoing, while the bleak melodies paint a morbid picture of a party on the wrong side of town.

On the surface there are many stylistic gaps (most notably that ever-notable speed) but in the more intangible qualities where music reaches us deepest, the sound of Fishermen transports you far from the safe formulas and familiar structures of modern day techno and instead places you on that wild frontier that had people freaking out some twenty years ago. Make no mistake; this is no revivalist music, far from it. This is music to give you that dizzying rush when you finally hear something fresh in a quagmire of predictability.

A1. Palmistry
A2. Six Pounders
B1. Black Haze
B2. Port Strays