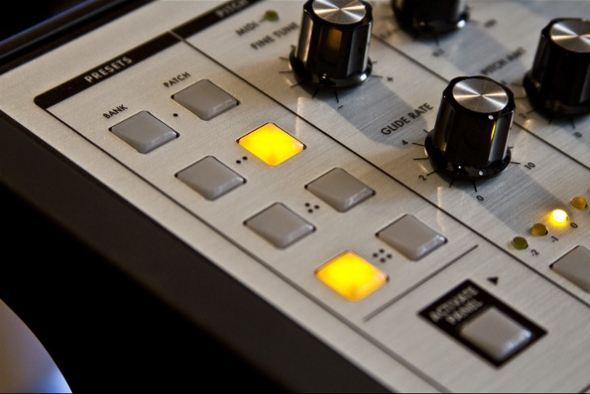 Moog have been heading off in different tangents in recent years, offering post-Voyager models such as the Little Phatty, Minitaur and more recently, the Slim Phatty. The new Sub Phatty synth is another effort from Moog that downsizes their formidable sound into a more affordable form, featuring two oscillators with a sub square wave and a noise generator. Anyone who has worked in the analogue world will pleased to hear that the circuitry takes less than 60 seconds to become stable. With the addition of a multidrive circuit, this may be no bad thing at all. 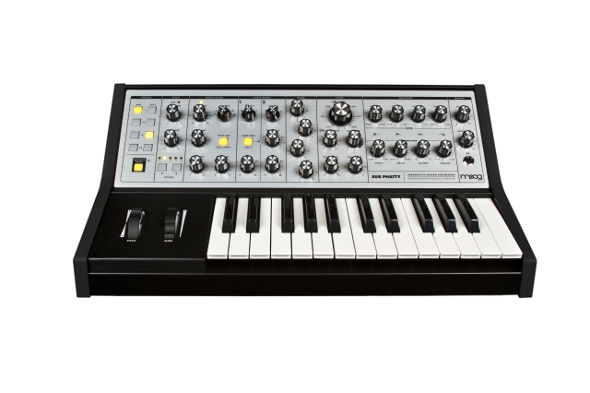 The Sub Phatty has a very clean looking interface with a simple and intuitive layout. If you are already used to the classic Moog setup then you will have no problems heading straight into a sound design session. It has two oscillators with continuous selection between triangle, saw tooth, square and pulse wave forms, with a chicken’s head switch to determine the octave that you want to operate in (16’, 8’, 4’ or 2’). The second oscillator also allows you to tune separately from the first oscillator plus or minus a fifth, giving you the opportunity to get those hefty lead tones found on old jazz funk records, or, if you prefer, strange electro-styled detuned bass sounds. There are two ADSR envelopes on board, one for the filter and one for the amp in line with classic subtractive synthesis associated with Moog, while the unit also offers the possibility of saving our sounds in any of four banks of four patches, though it ships with presets already programmed. An external audio input jack also allows you to use this hardware to affect other sound sources, opening up its possibilities further.

There is also a sub oscillator thrown into the mix which will throw out a square wave an octave below the first oscillator, and a pink noise generator that is surprisingly wide in frequency range. The modulation comes from the LFO through triangle, square, saw, ramp, SH & filter envelope to pitch, filter and wave shape with the added option of modulating the pitch of oscillator two only. There are two audio outputs with separate volume controls, that is to say, main volume and headphone volume; however, with the master volume feeding the headphone volume, this could prove prove a drawback to those using the unit live.

“Analogue synth purists will find much to love in the Sub Phatty’s luxuriant tone and efficient control design, while those looking to add some analogue gravitas to a digital world will also be satisfied with the possibilities opened up by the multidrive control.”

Although the unit is adorned by considerably more knobs that both the Little Phatty and Slim Phatty with which to affect waveforms and filter envelopes, there is nevertheless some use of a shift mode to access all the unit’s functions; these aren’t clearly labelled on the front panel meaning there is a fair bit of diving into the manual to figure it all out. However, using this shift mode it’s possible to achieve some subtle and detailed changes; for example, adding a delay or hold stage to parts of the ADSR envelope, changing the input volume of the external audio input signal, adjusting the pitch bend range or the filter slope and much more, including the bulk of the MIDI functions. If this sounds too complex, a VST plug-in editor for the Sub Phatty is promised from Moog, though so far it has yet to materialise.

The sound of the Sub Phatty itself is that of the classic Moog that we have all come to know and love. It is devoid of any cheap digital ornamentation but it also has something new. There is a crystal quality to the sound and with the all-new multidrive possibilities, the tone of the Moog sound is opened up to new possibilities. The sound of this new feature allows you to leave behind the classic buttery smooth Moog sound in favour of something more dirty and all the more unruly; screaming lead sounds with nasty wobble basses can be created, while the addition of the sub oscillator allows you to retain the fullness of the sound whilst simultaneously breaking it apart. With the MIDI over USB and CV/Gate controls, further possibilities are opened up; there is even DIN I/O that offers the possibility of hooking the unit up to vintage Roland machines. 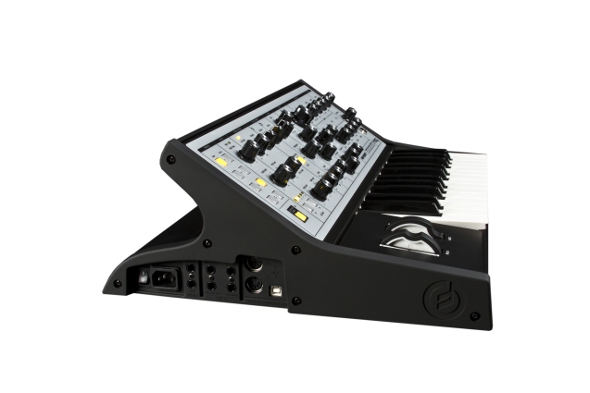 The Sub Phatty has been compared to the Little Phatty, but these comparisons tend to miss some of the key points in regards to the functionality of the different instruments. The Sub Phatty has been designed with a much more hands on and complete control workflow in mind, ideal for both live and studio based work. This is mainly because each control surface controls a single practical parameter, whereas the Little Phatty economises on the layout for the purpose of space. However, the Little Phatty is probably less suited to the live arena than the Sub Phatty, because you are much less likely to hit a wrong function button or change patch accidentally mid set with the newer unit, despite the fact that the Sub Phatty’s two octave keyboard is perhaps a little under endowed. However, it’s the Sub Phatty’s multidrive feature, allowing you to get screaming, razor-like tones from the unit that really set the two apart.

There’s nothing particularly new about the resurgence in popularity of analogue monophonic synths. Dave Smith’s Mopho has been selling like hot cakes for a couple of years now, and it includes a gated sequencer and arpeggiator with a white noise generator and feedback loop; it’s also got a lot more modulation possibilities thanks to its four LFOs. For a simpler, keyboard-free analogue monophonic synth there is the Doepfer Dark Energy, which is small but singularly impressive. However, neither of them sound like the Sub Phatty, which not only has the unique Moog sound but also feels built to last thanks to the great finish on the details, which put it in line with some of the more high-end boutique synths that have emerged of late. Analogue synth purists will find much to love in the Sub Phatty’s luxuriant tone and efficient control design, while those looking to add some analogue gravitas to a digital world will also be satisfied with the possibilities opened up by the multidrive control. From smooth classic Moog synth basses to crazy wobble modulated sounds, there’s little the latest Moog can’t do.