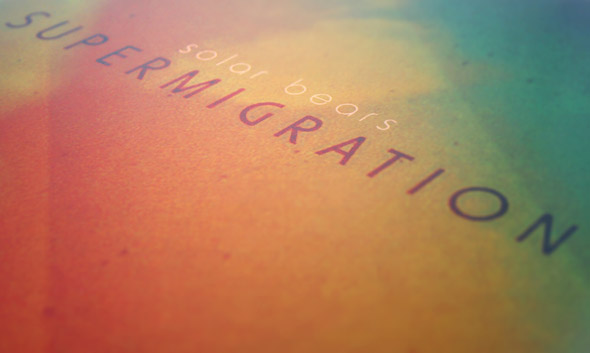 In a rose-tinted cross-pollination of vintage psychedelia and bold production, Solar Bears follow up their debut LP She Was Coloured In with a decisive leap forwards. The duo of John Kowalski and Rian Trench represent the less considered side of Planet Mu Records, remaining faithful to the imprint since their inception and reflecting label boss Mike Paradinas’ love of indie synth pop – something that came to the fore with his recent Heterotic project.

In terms of the progression from their last album, this time round Solar Bears have placed even greater emphasis on synthesisers. The dynamic is still very much that of a live band, with plenty of instrumentation in the mix, but on this record the plush synthesisers take centre stage. That said, the pop tendencies are equally grappled with confidence, with notable vocal contributions from Keep Shelly In Athens and Beth Hirsch. The inclusion of the latter as a guest has a particular resonance when listening to Supermigration, as a vocalist on Air’s coffee-table dominating 1997 album Moon Safari. Once the connection is made, it’s hard to shake off the similarities between the French duo’s romantic synth pop and Solar Bears, and it’s no bad thing. Unafraid to embrace the sweet and sensual in music, Kowalski and Trench have arguably taken the blueprint Air laid out in their early years and taken it further into the cosmos.

“Love Is All” is a perfect case in point, riding in on plaintive Rhodes and delicate drum machine accompaniment, before gently plucked, muted guitar and synth flute come cooing in alongside choral tones from unidentified females voices. In deft, lilting key changes, the intention is clearly to soothe and elevate. This is not emotionally one-dimensional music though, neatly side-stepping the bland with an air of mystery and wonder that makes it simply captivating.

There are still moments when the new wave aspect of the band comes through, as on “The Girl Who Played With The Light” and the aforementioned Hirsch collaboration, “Our Future Is Underground”. In truth these moments, while tapping into a shoegaze mentality that makes sense within the ambiance Solar Bears inhabit, come off sounding a little forgettable when juxtaposed with more striking tracks.  “Komplex” is one such memorable moment, returning to those dramatic choral vocals and laying down rich arrays of arpeggios and booming drum pounds to perfection. When the guitar comes into the mix here, it’s processed to sound like a synth lifted from a Boards Of Canada track, and as such sits incongruously amongst its fellow sonics.

With an album such as Supermigration, it feels like the point is to let the mood and the spirit of the music carry you unconsciously. While the diversity of approaches from track to track can throw that ride askew at times, it never bumps out of that sensitive state in which the album is clearly intended to reside. For those more reflective moments in life, Supermigration has a wealth of emotion to impart, and it does so with intrigue as much as passion.

1. Stasis
2. Cosmic Runner
3. Alpha People (Feat. Keep Shelly In Athens)
4. Love Is All
5. The Girl That Played With Light
6. You And Me (Subterranean Cycles)
7. Komplex
8. Our Future Is Underground (Feat. Beth Hirsch)
9. A Sky Darkly
10. Rising High
11. Happiness Is A Warm Spacestation
12. Rainbow Collision