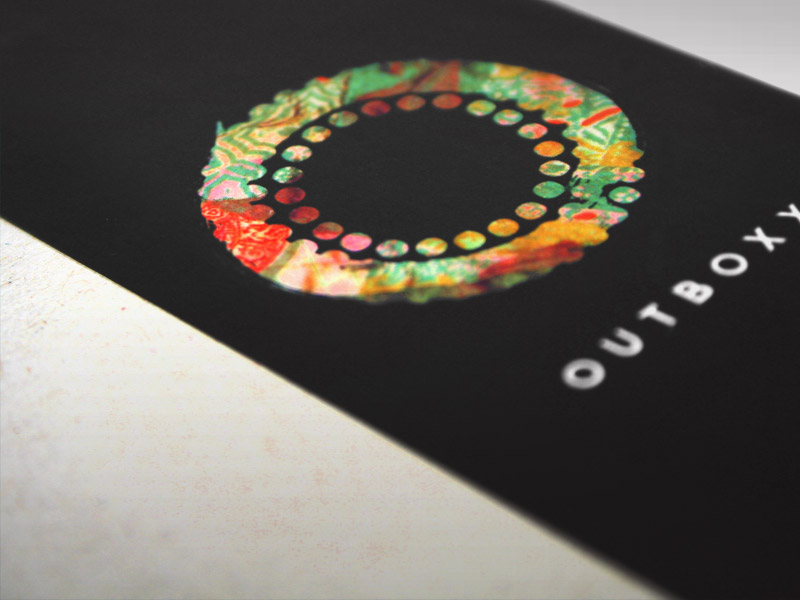 Following a succession of well received releases spanning moody Detroit instrumental dance tracks, classicist 90’s slow burning house, and New York bassline thump, Matthew Lambert and Jacob Martin have done a formidable job of developing their Outboxx project into a force to be reckoned with. Sometimes accompanied by vocalist Naomi Jeremy’s vocal stylings, the duo is in the process of ascending into their own recognized niche within Bristol’s current sonic state, ably assisted by two years of appearances on Idle Hands, Well Rounded, Immerse and perhaps most memorably BRSTL with last year’s Through The Night release.

Outboxx’s self titled LP debut melds their styles into a cohesive sound paying subtle homage to both the classical and jazz roots that Lambert was originally trained in while also scaling hazy peaks and misty depths connecting deep house, minimal techno and ballsy garage; squint and imagine a more introspective Julio Bashmore wandering through a barren cityscape, and you’re getting there. Most riveting when working with slower tempos, Outboxx is most thrilling when deriving their sounds from the remnants of long lost end-of-the-night disco ballads. However, while their debut LP finds them unconcerned with dropping the jaws of dancers, there are still plenty of compulsively addictive rhythms throughout.

Unfortunately, the weakest cut on the LP might be leading track “Home.”  Though pulsating with lovely subtle organ chords, it has to contend with Naomi Jeremy’s stilted lyrics, which seem to be struggling to cram in a narrative that doesn’t quite fit the assigned rhythm, trying to forcefully milk nostalgia out of a song where there’s little to be found. It’s puzzling, since Jeremy’s vocal prowess gels much more naturally on “Lost Soul” – here, she evokes early-era Jessie Ware over bristling pads, remaining soulful and emotive without overindulging in touchy feely sentimentality. It’s unclear whether Jeremy’s vocals are put to work within the foggy improvised parameters of  “Jewel City,”  but the end result is still invigoratingly off the cuff; kind of like Jai Paul making deep house demo cassettes.

There’s certainly a subdued nod to Andy Stott and Luxury Problems vocalist Alison Skidmore on “All The Right Moves,” which gleefully chops the vocal sample into paper thin snippets and then disperses them liberally around the intuitive programming patterns at fall somewhere between Dinky and Bashmore’s melancholic house sounds. Simmering at a constant pace, it’s one of the album’s quicker paced offerings, yet one never gets the feeling that it was constructed solely as a dance floor tool or solely to move bodies.

This is the case even with a track entitled “Thrashing Groovster,” from which one would expect a monster-truck-derby level of chaos. But there’s much more groove than thrash happening within– reminiscent of Martin’s forthcoming collaboration with Peverelist on the Pev & Hodge record on Punch Drunk Records, it’s an abstract chorus of synths slowly coming together and taking form. The flange muddled piano line running throughout feels spontaneously created, sounding somewhat like a lost Levon Vincent demo. But “Withdrawl” easily outdoes all other tracks on the album in terms of minimal techno immersive-ness: ghostly keys and pulsating bass pockets just barely hold the rickety affair together. When unconstrained by a pop format, Outboxx fill five minutes effortlessly, and it’s while flexing their deep experimental tendencies that they sound most at home.

That’s not to say that they’re not powerful when doing straight up dance cuts. “Sunshine Mills” has the same jazzy Jersey house percussion that Kerri Chandler fans will either find themselves celebrating or shaking a fist at, depending on your feelings about the Jersey house revival movement. Regardless, it’s hard to feel cynical about much of anything as poppy garage vocals echo overtop the track’s piano-driven thump.

A puzzling but effective closer, “My Destination” stacks slinking house beats on top of each other, while an artificial symphonic violin scrapes alongside the track, sounding much more disconcerting than symphonic. It’s an album closer that suggests impending trouble – the sound of thunderclouds rolling in on the horizon. Or maybe it’s just a reminder that no matter how hard we journalists try to characterize and pin down Outboxx’s output, the forecast could change at any minute.