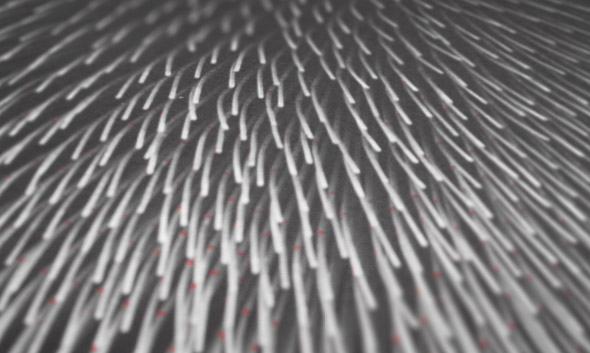 Given the sheer number of projects and aliases Miles Whittaker already has a hand in – Demdike Stare, Pendle Coven, and a whole host of others – it seems almost counterintuitive for him to release anything under his own name, primarily because so much of what makes the music under those monikers so compelling is their certain level of mystique. Whittaker hides himself behind concepts, samples and arcane moods; whether it’s the occult VHS aesthetic of Slant Azymuth, the junglist techno of Millie, or the hardware only, one take approach of Suum Cuique, each of his projects has a distinct feel of its own.

Faint Hearted is Whittaker’s second record released simply as Miles following the Facets EP in 2011; in hindsight Facets seems to have been somewhat overlooked, something no doubt down to the fact that it was sandwiched between a certain two records from Andy Stott on the Modern Love release schedule. Consisting of four tracks of patient techno containing the same kind of dread and requisite sonic muck that has characterised much of Modern Love’s recent output, it was nevertheless considerably less diverse than Faint Hearted is.

Opener “Lebensform” revisits the foggy, indistinct sound of Facets, placing spectral jungle rhythms over a swelling noise floor, but unlike the recent Testpressing efforts from Demdike Stare, the effect is much less savage, letting the rougher edged textures filter though at choice moments while an almost soothing chorus of primitive oscillations twist in the background. “Irreligious” pulses like the arcane machinations of Suum Cuique’s Ascetic Ideals album, as an indistinct kick drum thuds amidst distant mechanical noise.

Although there is a certain degree of Whittaker revisiting the sound of past projects on Faint Hearted,  it isn’t just comprised of offcuts. “Status Narcissism” sees him experiment with a more skeletal form of linear techno, wrapping parallel white noise pulses around a hammering kick drum; following this the album’s energy is cast adrift into “Sense Data”, a surprisingly clean ambient track which eases into a chorus of synthetic plucks. For a producer usually so associated with sounds more likely to induce fear or a certain degree of discomfort, both that, and the sleepy tape looped clatter and simple piano melody of “Rejoice” display a surprisingly meditative approach.

Whilst the elegiac strings of “Archaic Thought Pattern 1” may have the initial mood of a Demdike Stare track, its heavily distorted drums and quivering accents give it a character all of its own. Following “Queuing”, a brief but heady palate cleanser of what sounds like an orchestra tuning up, closer “Loran Dreams” provides the most remarkable track; a dreamlike combination of drifting percussion, drawn out pads and swaying arpeggios, it has more in common with hi-resolution Japanese video game music than his typically darker fare, using its Tangerine Dream-meets-Final Fantasy VII soundscape to bookend the album’s crunchier beginning with something altogether more sedate.

The diverse nature of Faint Hearted inevitably makes it feel at times like a collection of disparate Whittaker productions, but freed from the conceptual constraints of his other projects, it’s easier to get a sense of where his ideas all come from. There’s something almost primordial about these tracks; like the most basic strains of bacterial DNA left to develop in a petri dish, these tracks feel like still-gestating lumps of flesh and sinew. Disparate and somewhat unformed they may be, but in a landscape where experimental analogue techno producers are increasingly becoming ten a penny, Whittaker’s solo approach feels ten times more refined than many of his peers.