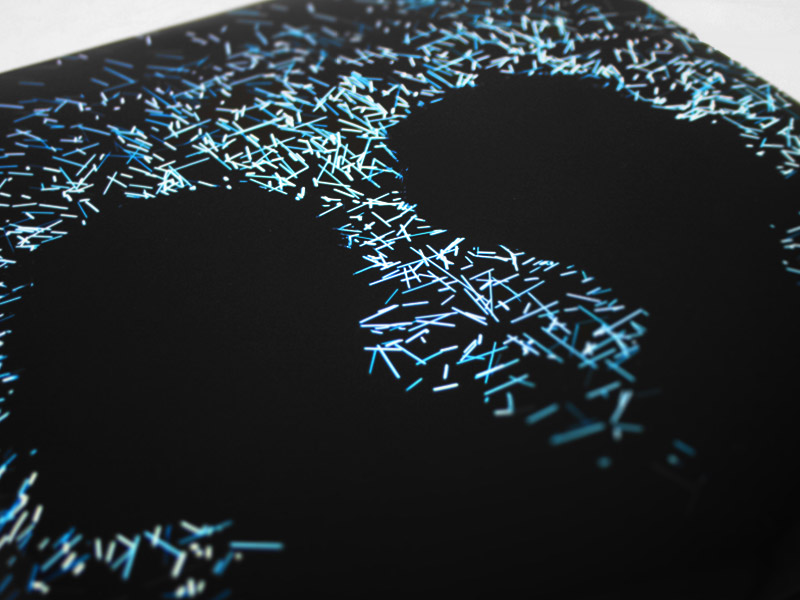 When asked how to describe their sound in a recent interview, Andy Harber & Richard Roberts could only admit that their productions “sound… very Letherette.” It’s a statement that’s both fitting and inadequate: The Wolverhampton-grown duo who cut their teeth releasing woozy spliced up edits on Alex Nut’s Ho Tep label are not lacking for inspirations– listening to Letherette brings a flood of associations to mind, from Discovery-era Daft Punk, Madlib and the more intergalactically minded members of the Stones Throw crew, Bibio, Dilla, Dam Funk, Donna Summer, as well as a bevy of darker UK dance influences.

But for all their audible influences, Letherette’s self titled debut LP on the prolifically experimental Ninja Tune label doesn’t come across as pastiche or a cut-and-paste reconfiguration of old sounds. Instead, this release finds Harber & Roberts engrossed in a world of their own unique sampling prowess; too unique to sound much like anyone except themselves.  Album opener “After Dawn” is an accurate snapshot of the album’s hurdling, kinetic energy. Distorted synth echoes are grounded by a weighty thumping 4/4 beat and a surgically altered vocal sample that’s been tweaked just enough to cause a feeling of pleasant disorientation. Though much more dance floor oriented than the psychedelia of older Letherette tracks such as “Cherryade”, there’s still an aura of pleasurable springtime tipsiness left intact here.

And speaking of pleasure – if Daft Punk’s forthcoming Random Access Memories is harkening back to the disco-hook filled hedonism of Discovery as much as the teased tracks suggest, then Letherette are positioned to benefit by proxy. On “D&T,” they employ a scaling, wailing guitar solo that give off a feeling of un-ironic stadium rock euphoria; it’s “Digital Love” with a few extra wa-wa pedals and leopard-print headbands. The duo’s sun-soaked proclivities are equally present on “I Always Wanted You Back”, wrapping an orchestral violin-backed track in a beat that owes as much to J.Dilla and Kanye West as it does hot New York sidewalks in July.

Letherette’s versatility borders on shocking; even when the tempo is taken down a few notches, they still sound remarkably comfortable, such as on “Say The Sun,” which evokes chilled-out early era Four Tet. With softly plucked guitar strings and buzzing feedback swirling around a soft pattern of clicks and blanketed percussion, it’s a track that revels in its peacefulness, content to drift in a moment of relaxation. Their affinity for introversion is also present on the subdued “Gas Stations And Restaurants”, which lets some foggy vocals unwind over a spacey ambient backing track, reminiscent of an acoustic version of Spike’s “Magic Table” on Golf Channel Recordings.

Harber & Roberts’ previous releases for Ho Tep also showcased an appreciation for harmonious voices, such as the doo-wop sampling “Shoe Be Do” or soulful “Yeah Yeah Yeah Love.” On their debut LP, it’s a bit rarer to hear more than a single syllable survive the chopping block, but when they do, it’s noteworthy; “Restless” is one of the few tracks that leaves the crooning club ballad vocals completely intact, and it’s all the more powerful for it, especially when backed by a ringing chorus of nightclub-prepped handclaps and unexpected plummeting synths.

It’s also interesting how often the tone of a Letherette track can veer off onto an unexpected detour halfway through – though only one cut on the LP exceeds the six minute mark, it’s not uncommon for songs to spontaneously burst from one mood and tempo to another. Take “The One,” which begins on a sombre note, reminiscent of some heavily filtered future garage track. But two minutes in, a single crunchy synthesizer slap rattles the track and changes direction entirely; crafting a much more fulfilling organ stab-filled pop cut. Same goes for “Cold Clam,” which begins with the unsmiling dissonance that an XX instrumental might have, but then bursts out into a harp-strummed joyful freakout.

While Letherette’s ambitions cover enough genre terrain to earn themselves an A.D.D diagnosis and accompanying Ritalin prescription, every style of music that they touch resounds with an earnest devotion to the source material. Their diverse re-envisioning of 80’s pop, hip hop and filter house sounds coupled with the psychedelic positivity eking out of every track makes Harber & Roberts’ debut an essential summer album of the highest order. Open up your window and let it drift out onto the streets below.