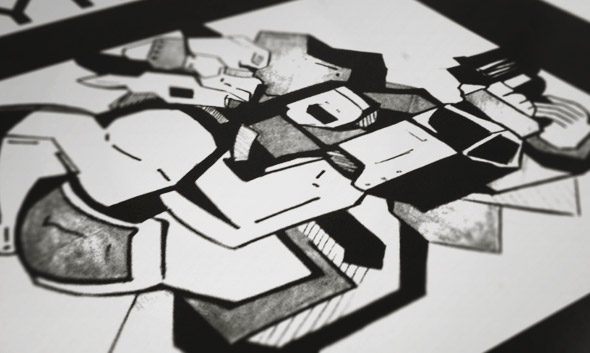 Normally, the use of purist names is a turn off, but in the case of The Analogue Cops, it’s endearing. The Berlin dwelling Italian duo project a more fun, almost goofy image than the ultra-serious types, and their Restoration label has attracted numerous collaborators – Blawan, Steffi, Ryan Elliot and ND Baumecker amongst them – since its inception in 2007.

This has a lot to do with the duo’s sound; carved out on hardware gear, it is playful and inventive, skirting at the borders of techno and house, thankfully never veering into the monochrome banality of ‘tech-house’. Yet the common feature throughout their work, either as The Analogue Cops or under their Xenogears and OCP aliases, are the beats and rhythms. Heavy without being harsh, forceful without sounding suffocating, they bump and kick with exactly the right amount of weight.

This is evident on Heavy Hands, the duo’s debut album. “Fraudulent Advisors” features crashing drums at its heart, laying the basis for an eerie synth line and a repetitive vocal sample; “Light Reduction” (which features long-time collaborator Blawan) also focuses on the drums; this time they’re teased out and unflinching, providing the basis for a malevolent, creeping acid line. At the other end of the spectrum, the duo’s drums are slowed down and dubbed out as they accompany a rolling filter and dramatic string stabs on “2nd Disco Crime”, their collaboration with Panorama Bar resident and fellow Third Sider Steffi. Even at this more reduced tempo, they grind harder than gabba.

In some ways, it’s a pity that Lucretio and Marieu are so open to working with others, because it threatens to overshadow their own work. The title track on the album and “Vopo” are classic examples, terse vocal snippets, tight claps and scratching, lo-fi riffs unfolding over those unmistakable drums. That’s not to suggest that they are unreconstructed track-heads either – “Grove Line Forcing” contains a gloriously seductive vocal sample emerging from mellow chords – but as far as heads-down, raw sounding house and techno tracks go, these guys are the law.