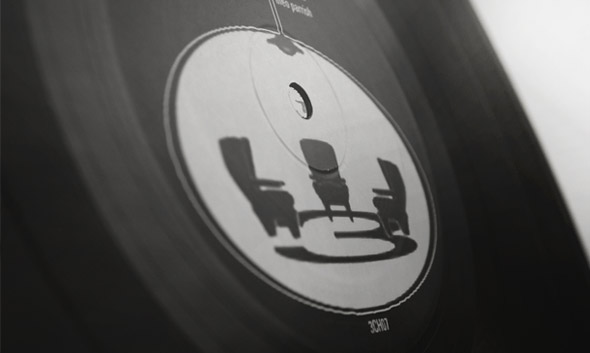 Has it really been seven years since the last 3 Chairs release? Bar the compilation Spectrum that landed in 2009, the intermittent supergroup of Detroit titans that is Kenny Dixon Jr., Marcellus Pittman, Rick Wilhite and Theo Parrish has been absent from the airwaves for some time. Considering there have been just four singles and one album from the collective since they first hooked up in 1997, it’s understandable if there’s something of a clamour around a new single from four producers who tend to create feverish responses individually, let alone as a combined unit.

What has always appealed about the 3 Chairs project is the loose nature of it, never sticking to one strict sound and sporting the influence of all the members in different measures depending on the track. It gives an air of laissez-faire that suits the crew as a whole, and you wonder whether that 3 Chairs moniker came from some studio set up that meant one of them always had to be stood up as they hustled around equipment to lay a track down.

It certainly feels as though these tracks, much like the rest of the group’s output, have been born of free-flowing jams rather than measured composition. It adds a sense of magic to the music to imagine the scene as Parrish leans hunched over a sampler while Moodymann rocks a drum machine and Wilhite flies some FX in on top as Pittman tweaks the mixer. Of course that may be a grossly inaccurate mental picture to create, but the high profile of the individual artists inescapably adds weight to the listening experience, and there’s always something about that group based jam aesthetic that elevates electronic music commonly created in quite dry, solitary situations.

The title track certainly sounds like it would have been a lot of fun to make; “Demigods” is a raw acid cut in the finest sense of the term, rocking drum machine, 303 and effects for the majority of the track, but this is no bargain basement jacker. The fluid treatment of the drums is sublime, as stuttering splashes come in and out of the mix erratically and the bassline remains perhaps the only constant in this lysergic mess. Towards the end a touch more synth sneaks in wraithlike forms in the background, creating the kind of dimensions most primal acid tracks would fail to reach. It’s undoubtedly a benefit of having many hands on deck, combining impulsiveness with the ability to get dynamism in a tune.

On the notion of certain tracks being identifiable to certain members of 3 Chairs, it’s hard to deny that “Elephant Ankles” is doused in Theo Parrish. From the first jazzy stylings of piano to the contrasting rhythms of guitar and strings that feed into a tangle of polyrhythms, this is rich, soulful, organic music like only Parrish knows how to make. Of course the additional input brings extra dimensions, but it’s hard to hear past a vibe that sounds decidedly Rotating Assembly. Whatever the source, it’s an astounding track of complexity and beauty, making the most of interlocking looping elements without it ever feeling repetitive.

In a similarly if less obviously identifiable way, there’s a definite whiff of Kenny Dixon Jr. about “6 Mile”. The beat comes on like some of his more mechanical moments, while the atmospherics in the lead-in are enchanting like some of the more abstract Moodymann outings. However the cheeky bassline that signals the drop of the track (if you could call it that) could be anyone’s, sporting a quirk and sass that doesn’t instantly register with any of these predominantly ‘serious’ artists. Much like “Demigods”, there’s a felt-out simplicity to this track that suggests it came together quickly, but that belies the rich detail the track has to offer.

As the most outré of all the tracks on the record, “Celestial Contact” twitches over a sole shaker while distant whispers of piano, submerged bass and pads cry from very far away. It’s a subtle approach that favours patience, but sports just as much merit from a minimalist perspective as the neighbouring tracks do in their respective fields.

What’s most pleasing about listening to 3 Chairs is the sense of noted producers letting their hair down and having a bit of fun. Of course it’s not always serious business, and all four know how to work a joke into their music (Dixon Jr. being especially adept at a bit of irreverence from time to time), but the spirit of the 3 Chairs tracks now as ever is one of freedom. That four such contrasting tunes could sit on a record says a lot, and it’s not like there’s some great intangible aura holding them together. Perhaps context and knowledge of the participants clouds one’s perception of the music the project yields, but there’s no denying the enjoyment to be found in getting deep into or getting deep down to this record.