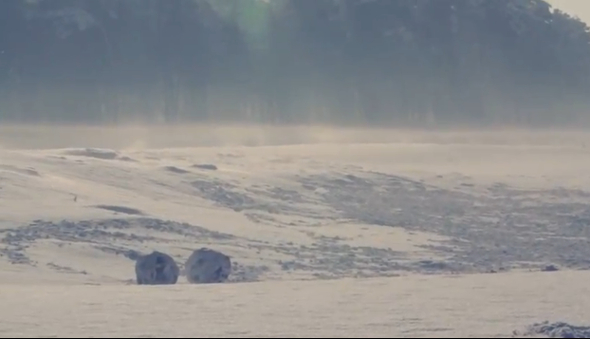 The visual skills of Heleen Blanken blend with some original new music from Jeff Mills on The Alignment, a new short film for Axis Records’ video concept Alpha Centauri.

The video represents the second time Dutch visual artist Blanken has worked with Jeff Mills after introducing Axis Records’ video division Alpha Centauri with the short film Space Time Continuum. After witnessing Blanken’s work at the Awakenings festival, Mills contacted the filmmaker with the idea of collaborating and the two quickly exchanged musical ideas and scripts. Blanken explains in an interview on the Axis Records website that Space Time Continuum, unlike The Alignment, had its music chosen before making the film, but after shooting in a snowy and undisclosed Netherlands location, Mills decided to make a new score on the basis of the picture stills sent back to him.

The Alignment intertwines tension, hope and marvel with themes of telepathy and Mills’ fascination with the universe. The film’s opening images look they’re filmed through a (un)focusing microscope, researching otherworldly minerals and protoplasms, before unfolding into a Adam and Eve-like story, as two young characters watch a distant jet stream streak across the sky. Blanken’s next visual work will be for Ben Klock and DVS1 as part of a Klockworks showcase.