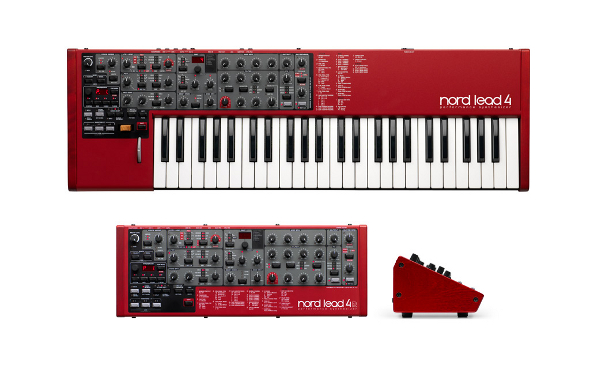 Nord have revealed a refresh for three of their key products, including their popular Nord Lead synthesiser.

Introduced in 1995, the popular Nord Lead range of virtual analog synthesisers hasn’t been updated since 2003. The Nord Lead 4 offers a range of new sound shaping capabilities; a new 2-oscillator virtual analog sound engine with 2x oversampling and new Variation buttons seem to be top of the list of new features; the latter lets the user override almost any parameter of the synthesiser, allowing instant changes in things like LFO speed, modulation routings and reverb. Like previous models, the Lead 4 will be available as a four octave keyboard version, and as a more compact rack unit.

Nord have also unveiled the successor to their Nord Drum unit; originally released in March of 2012, the four channel virtual analogue drum machine was a basic unit designed for use with external sequencers and drum pads. The Drum 2 expands on this with six channels, which now output in stereo instead of mono, while its new features include resonance modeling, FM synthesis, distortion effects, stereo outputs with panning and CC control. Nord have also revealed the Nord Pad, an optional  6 pad accessory for the Drum 2 which connects via an ethernet connection and turns the Drum 2 into a compact electric drum kit.

As well refreshes to as the Lead and Drum lines, Nord have updated their Nord Piano 2 line with the Piano 2 HP, featuring their lightweight 73-key Hammer Action Portable keyboard.