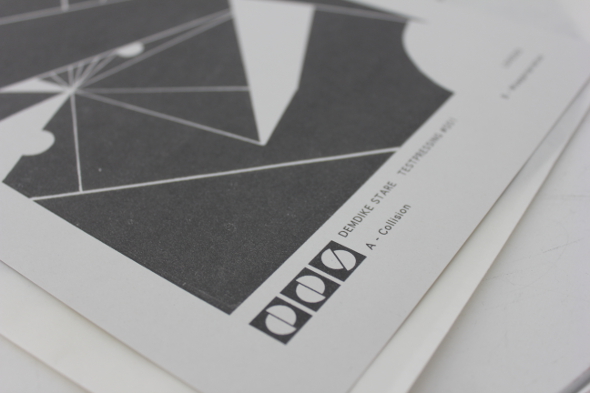 It seems as if everything the young Anthony Naples touches at the moment turns to gold, something he’s carried through to his new label endeavour, Proibito.

Naples stated an intention that Proibito would “promote and document the more experimental side of music coming out of New York City, the US and beyond”, and with its debut release from Huerco S’ freshly minted Royal Crown of Sweden moniker it starts out doing just that. Filled with the kind of raw, lopsided house jams the L.I.E.S. and Future Times crews have been putting out of late, this record is, as our own Brendan Arnott says in his review, “weird in all the right ways, the R.E.G.A.L.I.E.R. EP is the kind of record you buy for that friend of yours who stopped buying records because they thought dance music was getting boring and formulaic and hopeless”.

Those who like their house a little less experimental however were well served by the debut release from Panorama Bar resident Virginia on Ostgut Ton, with Loch & Hill providing four tracks of jacking Chicago and Detroit inspired house for those long Sunday afternoons in Berlin. Of course there was perhaps a bigger house record released this week, in the form of the return of Detroit’s very own supergroup, 3 Chairs. Across the humbly named Demigods, Messers Parrish, Dixon Jr, Wilhite and Pittman lay down four tracks of squelching acid, tumbling analogue house, dusty beatdown and loose-limbed jazz; unsurprisingly it sold out swiftly.

Perhaps the most diverse showing of releases fell into the category of bass, which saw a spread of music from Bristol, London and Paris vying for our attention. Possibly the most interesting was the new EP from Night Slugs co founder L-Vis 1990, released digitally this week. Trading in the Dance Mania informed ghetto house of his Club Constructions release and subsequent remixes for something altogether more abstract, Ballads is a surprising about turn for the producer, creating three tracks of impressionistic grime reductions in the vein of his associate Bok Bok. It was an EP that felt close in sound to the music contained on ClekClekBoom’s debut compilation, Paris Club Music Vol 1, with contributions from French Fries, The Town and Manare all offering a strong statement from the generally unsung French bass contingent. Meanwhile Swamp81 returned with a record the YouTube dwellers have been clamouring to get their hands on in the form of Furrball, a two collaboration between Zed Bias and young producer Paleman with a title track that sounds bizarrely like Skudge jamming with Fake Blood.

Similar hybrid sounds could be found on the second record to emerge from Fabric’s Houndstooth imprint, with House Of Black Lanterns’ debut EP Truth & Loss release featuring an atmospheric combination of drum & bass and techno forms. However, it was chameleonic Bristolian Kahn that perhaps impressed most, following up that essential Deep Medi release last year with a killer self ttitled EP for Blackbox; the highlight was undoubtedly “Badman City”, with the uncomparable Flowdan’s original vocals a far cry from the rough sample of the MC used on Kahn & Neek’s “Percy”.

Techno was similarly diverse, with all manner of niches catered for. Top of the pile was the debut album from The Analogue Cops. Despite a multitude of songles, EPs and other projects, Heavy Hands has been some time coming, but it’s as weighty a journey through their singular brand of militant, raw, hardware-only house and techno as you could expect. Similarly pounding was the first release on Untold’s new vinyl-only techno label Pennyroyal; coming from moonlighting dubstep producer J Tijn, the ramshackle hard techno sounds of tracks like “Jack 2” and “Fucklebucks” sound as if they could have come straight out of the early 90s.These were a far cry from the latest releases from Mike Dehnert and Bleak, whose respective styles of were present and correct.

However, the most savage sounds of the week undoubtedly came from the unholy trinity of Blackest Ever Black, PAN and Modern Love. Blackest Ever Black came through with not one but two new records. Originally released on tape via Dominick Fernow’s Hospital Productions, Rainforest Spiritual Enslavement’s Black Magic Cannot Cross Water contains two suitably haunting longform productions, but it was Alexander Lewis debut A Luminous Veil that struck us most, moving through arpeggiated power electronics to bleak drone feedback; this sense of desolation is shared in Greek chamber trio Mohammad’s PAN debut, Som Sakrifis, where cello, contrabass and oscillators create an emotionally complex tapestry of sounds.

However, it was Demdike Stare’s new record on Modern Love that really shook the fillings from our teeth. Inaugurating an irregular series of Testpressing releases from the label (together with the tonugue in cheek artwork shown above), Testpressing #001 is quite unlike anything the duo have produced as Demdike Stare, eschewing their sample-based work for a combination of jungle breakbeats with bracing noise textures that are not for the fainthearted.