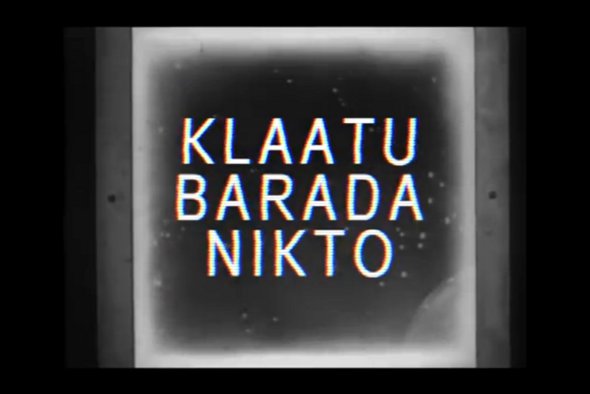 Another mysterious video has surfaced from the shadowy Strange U duo, an emerging hip hop project backed by Eglo Records.

As previously reported in June of last year, Strange U surfaced with a YouTube music video to their track “Plastique”, featuring free wheelin’ rhymes of Botox and facelifts with shout outs to Kim Cattrall and Hannah Montana. This was followed up in November with the “Scarlet Jungle” clip, which shared no more clues to the identities of Strange U. Although the duo’s debut record was released in February, a fresh science-fiction themed video directed by Eglo Records boss Alexander Nut has surfaced for the track “Klaatu Barada Nikto”, which references the 1951 sci-fi film The Day the Earth Stood Still.

The new video sees a bandana-clad MC Shadowboxer Star reveal his identity only slightly with a big “Yo”, directed down the barrel of the camera. Revving synths and rough bass swing heavy to Shadowboxer Star’s sometimes bit-graded vocals, spoken with the same spite as Nas in a Phi Life Cypher flow, while Nut’s cut footage supports the track’s interplanetary narrative by superimposing colourful transmissions of tele-fuzz over retro shots of galactic space labs and slinky-armed and antenna-head robots.