The Cyclist – Bones In Motion 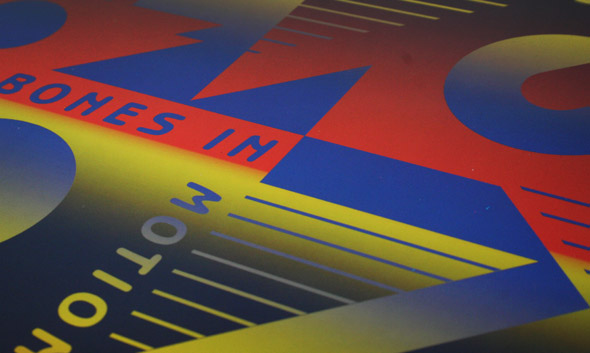 While there’s a healthy amount of interest in sonic degradation, disintegration and overall destruction at the moment, there’s always been an undercurrent of artists devoted to the charms of lo-fi sonics. The West Coast of America in particular has always been rich with budget beats for million-dollar imaginations, from Anticon’s in-house drone fiend Odd Nosdam to Not Not Fun and it’s 100% Silk subsidiary. Matthew David’s Leaving Records has long served as an outlet for this strain of sun-baked surreality, and so it is that The Cyclist comes wheeling into ear shot with his second album and a chance to spread his ideas further.

It’s a sign of the non-geographical times that his heat-treated method in fact hails from the UK, and yet sounds on opening track “Feel Beauty” like the long-lost soundtrack to a cult cassette-only sci-fi film from 1984 filmed exclusively in the state of California. It’s an evocative feeling, but it’s important at this stage to realise that The Cyclist’s music is not constrained by stylistic trappings. Amongst the glorious warble of fourth-generation synths come tantalising drum breaks, outlandish key change breakdowns and complex, non-linear song structures that go far beyond the limits of those who hide behind stylistic convenience.

Indeed “Mangel” plies a decidedly different trade in brusque broken beats and loping synth / chord refrains that come on resolutely optimistic. There’s still plenty of grit and dirt woven into the material, but it’s screamingly obvious that the texture wasn’t the jump-off point for the ideas that form these songs. The fact that they twist and meander, embracing vocals here and chord progressions there, peaking and troughing with accomplishment, burrows these tracks deeper in as you listen to them. It sure beats trying to peel back the layers to find paper-thin ideas leaning on the charm of the old to get by.

The propulsive techno spirit of “Bones In Motion” is a great indicator of the urgency that comes across throughout this album. There feels a constant need to surge forwards and express a fresh idea, rarely stopping at one point for long. Certainly the synths have a consistency to them throughout the record, but the percussion switches with dexterity between live, rumbling drums and snappy machine beats depending on the dramatic juncture of the track at hand. On a track such as the title one, with its ample running time over which to swell, the result is a thrilling kind of techno that crackles with electricity like the earliest Cybotron and Model 500 records did.

There are more experimental passages on the album, from the drunken pitch-bending fun of “Stove” to the druggy slur of “Makeshift”, but these sketchy moments only serve to enrichen the feeling of pure idea generation that bleeds from this most organic of albums. Like Daphni’s herbivorous way of injecting soul into dance music forms, Bones In Motion equally pulses with energy derived from the world around in a most unusual way. Seeming more informed by the mysterious nature of plants than the legacy of man, the way The Cyclist handles his devices brings an instantaneous fresh breeze against the standard approaches and repeated ideas that pervade all music forms.