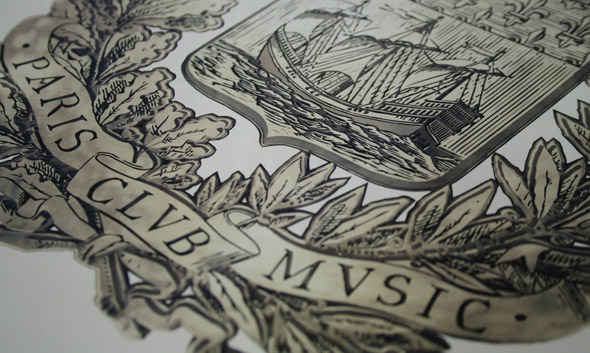 As a severely intoxicated Orson Welles once said: “Muaaaahah, the French!” Welles was referring to a cheap brand of champagne that he was filming a commercial for at the time, but the sentiment stands in general; there’s something intangibly unique about Parisian culture which bleeds out and seeps into the landscape of dance music (as well as film and art and so on, but you’re not on Juno Plus to read about all that). Parisian bass collective ClekClekBoom are at the squishy, pulsating heart of this scene, soaking up disparate styles from across the globe and transmogrifying them into something unmistakably French.

They cast a wide net with their sound: There are fragments of now-defunct French electro trailblazer Institubes’ legacy present, as well as bits of the “anything goes” club open-mindedness of the Sound Pellegrino crew. The whiplash-inducing sampling techniques of Jean Nipon inform parts of the label, as well as the imported Baltimore club and urbanized grimy house sounds of Kazey (now half of The Town). And of course, the slow but steady ascension of the Youngunz collective (Bambounou, French Fries & Manaré) into hometown heroes can’t be overlooked as an integral part of ClekClekBoom’s formation.

Paris Club Music Vol. 1 is the first time you’ll see all these players lined up next to each other, and the result is understandably polarizing. The highlights definitely depend on what the listener intends to get out of it – whether you’re expecting a series of sleek club tools packaged together or a sustained headphone listening experience can drastically affect what one takes away from the album. That being said, Jean Nipon’s “Coming At You” achieves immenseness effortlessly; beginning as a series of echo-laden, sparse percussionary measures banged out on what could be an alleyway dumpster. When a set of sparse grime horns emerge out of the mist, it’s powerful enough to make hearts leap into throats, commanding undivided attention. Likewise, all Manaré needs is a kick drum and the knack for swirling around a frothy, heavily shaken rhythm around to make “Riddle” the kind of track that can get stuck on hypnotic repeat; Larry Heard’s “Washing Machine” 12″ liquefied and served as a chunky opaque milkshake.

Clek Clek Boom’s first foray into straight up pop music is surprisingly subdued, but no less enjoyable for it. Ministre X’s “Calling Me” is a pop ballad accompanied by a skeletal two-step pattern and subtle wavering xylophone, with the potential to be blaring alongside Disclosure on the radio…  whether that’s something you find desirable is another matter, but the understated flourishes give it a depth beyond simple saccharine sugar rush. Bambounou’s “Night” deserves accolades for its stab-accompanied moaning and gristly, sinewy drum patterns.

But the label’s obsession with swear words and references to butts peppering their tracks is mystifying. French Fries’ “Southside” drones on about booty over dragging blippy ambience, and the Bambounou accompanied “Hugz” proclaims “I just wanna fuck” with all the eroticism of a yogurt commercial. Likewise, The Town’s “Dice” revels in the smutty repetition of a Lil’ Kim sample employing the words “boobs” and “ass”, but the novelty of something 2 Live Crew did twenty five years ago isn’t enough to carry the track for six minutes. There’s nothing wrong with going the lecherous route, but at times it seems that the samples were chosen for little more than ‘shock value’.

Speaking of samples, French Fries’ VIP edit of last year’s cringeworthy “Yo Vogue” makes an appearance here as well. “Yo Vogue” was a song about voguing which informed the listener that it was “really ghetto” – perhaps a poor choice of words considering the largely transgender, black and Hispanic queer roots of the ballroom scene. While this writer has no roots in the vogue scene and therefore no legitimacy whatsoever in this condemnation, “Yo Vogue VIP” raises the prickly question: When does homage become misguided appropriation? However, the VIP version does take out the line about voguing being “ghetto” and sprinkles in that ubiquitous Masters at Work sample instead, and approaching it from an apolitical stance, its mechanical thrum is mesmerizingly danceable.

This compilation is named Paris CLUB MUSIC Vol. 1 after all, so perhaps trying to fault it for obscenity or political incorrectness is missing the point entirely – maybe these songs are for the late night scream-along sessions in crowded clubs, and they provide a euphoric release that shouldn’t be examined too closely. There are certainly lots of moments worthy of dance floor revelation, like the racing dancehall strings and breakneck drums of “The Movement”, which touts a climax that feels downright symphonic. But if you’re looking at this diverse collection of tracks from the still-forming Parisian label under any kind of microscope, you may have trouble identifying what you’re focusing on… That French “je ne sais quoi” isn’t for everyone.