The Deadstock 33s – The Pilgrim’s Ghost 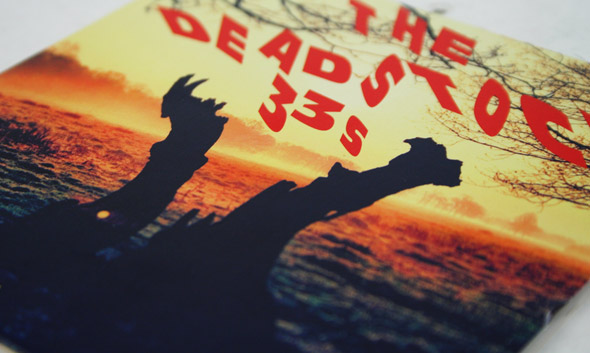 You’ve got to hand it to Justin Robertson; the man knows his way around a riff. Perhaps, in the decade and change since his last album, he’s been stockpiling them. Maybe somewhere in his house, amidst all the finely pressed suits and freshly polished brogues there’s a hidden room, just full of synth licks.

This writer has a theory Robertson might have planted the stems from “Boss Drum” in his garden twenty years ago, and grew a bass line tree that he’s been harvesting ever since. He certainly can’t be hard up for grooves considering the generosity with which he sprinkles them over The Pilgrim’s Ghost, his debut long player under The Deadstock 33s guise and his first full length album in over a decade.

Robertson’s crafted an eleven track earworm farm here that’s diverse in sound and unified by his love of the hook.  From the electroclash arps of lead single “Underneath The Pines” through “High Lane in Summer” – a main stage baiter that oozes mud and warm cider – to the acid dancehall of “Monty Dance” and its Caribbean take on the ubiquitous 303, Robertson has more hooks than a pirates’ haberdasher, and no less compunction in deploying them.

Unsurprisingly considering Robertson’s pedigree, The Pilgrim’s Ghost is a record embedded in electro, and the square wave rumble of producers like the Mole and Dexter are at its heart. In fact, despite the step away from the computer and mixing desk into a traditional guitar-and-drums setup, this is very much a record built on dance music principles; the bassline is the body, everything else mere dressing. And when that body is this toned, this supple and elastic like some Hollywood yogi, the pleasure is visceral, pure lust that doesn’t motivate digging beneath the surface.

Which is fine because, deep down, there’s not a huge amount more on offer with the eleven tracks of The Pilgrim’s Ghost; unlike bands that straddle stages and DJ booths, groups like LCD Soundsystem and even Robertson’s own Lionrock, who approached the dance floor from the rehearsal room, the Deadstock 33s draft live instruments into a dance studio and, as with the similarly set-up Brandt Bauer Frick, things can occasionally get a little aimless.

“The Circular Path”, for example, drapes its guttural low-end with a slightly flat dressing, and the looping rhythms that would be dynamite as a pure dance record become a meandering jam that loses much of its clout. Equally “My Best Dub” -whose only nod to dub seems to be Lee Perry style reverb laden treatment of the vocals – rolls on aimlessly, and the bone-jarring bass that blasts into the opening bars loses its sparkle through overexposure, with none of the other elements sharing focus.

The only step away from the floor comes in the album’s closing moments. ‘”Twisted Veil” sees Robertson dropping the tempo and opening up the arrangements to prove he can craft sublime pop music, but it just makes you lament the lack of ebb and flow earlier in the record’s run. This isn’t to say The Pilgrim’s Ghost isn’t a good record; it’s infectiously catchy and targeted straight at the rump, Robertson’s hooks will decimate festivals. It’s just that there’s a nagging sense that a very good record could have been a sublime record with a touch more finesse.