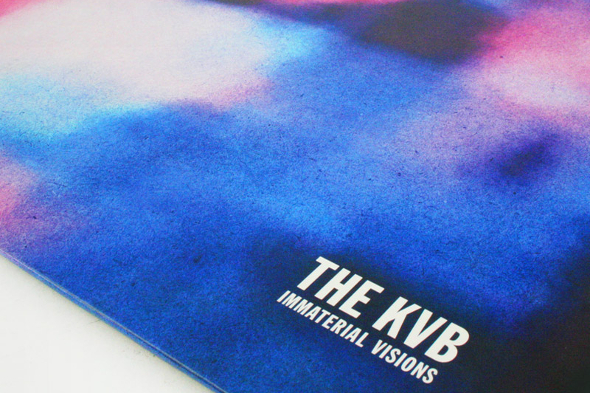 You have to wade through so much carefully orchestrated bullshit and content driven waste dressed up as music that it’s refreshing to come across a band whose ambitions seem a whole lot purer than striving to become the latest bit of sync bait. The KVB are one such band; the vehicle of the wonderfully named Klaus Von Barrel and synth player Kat Day, the KVB exist to put out records and play gigs and they do both of these functions with consummate ease.

It’s perhaps because of this lack of desire to validate their art via Best New Music columns or airplay by some risible radio DJ that the duo appeal so readily to label heads such as Karl O’Connor and Veronica Vasicka. The KVB were offered the illustrious chance to contribute to the former’s Downwards imprint with the Into The Night 10” released as part of the DO series of rigid post punk transmissions back in 2011, roughly eighteen months after The KVB first began as a side project for Von Barrel. Numerous albums from Von Barrel on cassette and digital formats preceded this 10” marking The KVB out as a prolific outlet for his creative urges, but the Downwards release seemed from the outside like a statement of intent.

In truth, this came about from a happy set of coincidences. Juan Mendez, more commonly known as Silent Servant, was apparently handed one of The Black Sun cassettes the duo released on Free Loving Anarchists by the label’s founder James Wing (of Pink Playground fame). It remained unlistened to for months before a casual moment of curiosity piqued the revered techno producer’s ears and lead to Von Barrel’s project being signed to the Downwards label that Mendez has curated alongside O’Connor in recent years.

This moment of good fortune placed The KVB in the esteemed company of Tropic Of Cancer, Antonym and DVA Damas within the context of the DO series and opened the band up to a whole new audience. It led to The KVB appearing at the world’s first shoegaze festival organised by iconic LA radio show Part Time Punks whilst touring throughout North America and Europe last year. It’s amusingly notable that a friend of this writer begrudgingly caught up in the mire of online press was unable to process the fact a band lacking in digital marketing and publicity could conceivably undertake such tours.

Around the time The KVB appeared on So Click Heels, the excellent Downwards compilation released last year, the band also started to regularly make the East Village Radio playlists of Minimal Wave’s Veronica Vasicka. It was therefore a pleasant surprise when news surfaced that Vasicka’s Cititrax label were planning to release an albums worth of material from The KVB. The resultant Immaterial Visions feels like the boldest, most confident statement from The KVB thus far and demonstrates their palette can expand beyond the shoegaze tag they are regularly adorned with.

This is immediately apparent on lead track “Shadows” which curiously sounds like a frazzled attempt at surf rock. Their trademark elements such as reverb laden guitars and hollowed out drums are present and correct, as are Von Barrel’s lustily drawn vocals, sunk deep in the mire, yet there’s a devilish energy that’s the complete opposite to the sluggish nature of shoegaze. The familiar wail of feedback that is “Dayzed” follows, appearing here after it was included on the aforementioned Downwards compilation last year, reminding you that Immaterial Visions is not an album “telling a story” in the traditional sense. These eight tracks were recorded over a year long period between 2011 and 2012 and hand picked by Vasicka from the vast archives of material the duo work on when not gigging.

Of course given the sheer amounts of intense feedback thrown about by tracks such as “I Only See The Lights” and “For The Day” it would be hard to discern any lyrical storytelling were that their intention. Instead, you feel for the time being that Von Barrel seems content allowing his lyrics to play second fiddle to their ever growing mastery of synth lines and guitar hooks. Yet the stunning “Old Life” hints at a compositional maturity from the pair; it’s a standout piece of this collection and perhaps the most overt example of Day’s blossoming importance as part of The KVB.

Her reverberant synths, which bring to this writer’s mind “Tick Of The Clock” by Chromatics, gradually compel the rest of the instrumentation into action and there’s a palpable sense of restraint throughout. The jagged guitar reverb playfully swaps positions with Von Barrel’s cooing delivery with a precision that feels both premeditated and thrilling, remaining in the recesses before swamping your senses as he steps back from the microphone.