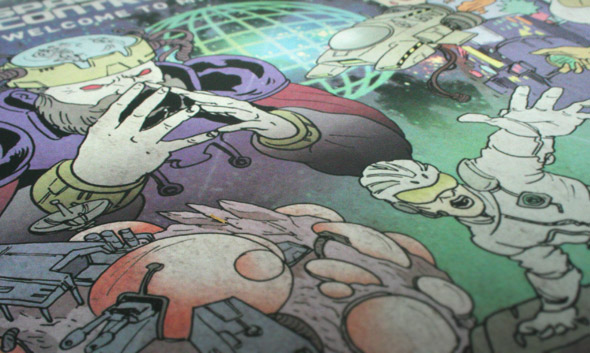 You have to hand it to Jack Hamill; there aren’t many musicians nowadays who would be so bold as to include a 750 word plot summary with the press release for your debut album, which is itself a conceptual piece about a character called Mr 8040’s journey through time and space to his home planet of Mikrosector-50.

Of course the reason Hamill can get away with this kind of thing is because he’s been building up this mythology for the past four years; the conceptual seeds were planted in early releases for Acroplane, Kinnego and Clone Royal Oak, and have slowly begun to grow into a concrete narrative across his more recent records for R&S, held together with the producer’s unique combination of funk and techno. Welcome To Mikrosektor-50, however is less a soundtrack to an imaginary film, and more of a fully realised space opera in its own right, with a cast of characters and locations so vividly realised Hamill has even written his own guide.

If it sounds a little difficult to swallow, that’s because it is at times; whereas “prequel” Pathway to Tiraquon 6 was vocal free, leaving you to indulge in Hamill’s sci-fi universe at your leisure, the built in chunks of scene-setting dialogue in his debut album proper leave no such ambiguity. Be it through commercials extolling the virtues of living on Mikrosector-50, an encounter with a cyborg known as “The Quadraskank” or snatches of dialogue from the Electropod’s computer, your mind is rarely left to its own devices.

There are obvious parallels to draw with Drexciya’s undersea mythology populated by fishmen, but where Drexciya’s setup was comic book, Hamill’s is just comic. It’s something borne out mainly by the central character of Mr 8040, whose swaggering persona is like a cross between Red Dwarf’s Ace Rimmer and Shaft; his characterisation (if you can call it that) at times feels forced, especially in the 80s hip-hop pastiche of “Mr 8040’s Introduction”, which, for good or bad, wouldn’t be out of place on the opening titles to an 80s Saturday morning cartoon.

If the humour of the dialogue and characterisation often feels strained, it’s because Hamill has no problem injecting that kind of energy into the music itself, which is excellent; tracks like “Welcome To Mikrosektor-50” or “Back Through Time With A Mission Of Groove” channel the frenetic electro of Model 500 or the aforementioned Drexciya whilst injecting Hamill’s own breezy kind of lysergic funk, while the downtempo interlude of “A Lonely Flight To EroDru-10” proudly displays Hamill’s shameless appreciation of 70s prog rock. The copious pitch bend present on “Rising” meanwhile reminds you that behind everything, there’s a producer absolutely shredding their keyboard like Slash would a guitar – something that’s hard not to be charmed by.

Welcome To Mikrosector-50 is easily the most accomplished thing Hamill has done; musically its scope is wide, and its vision is far reaching, while the downtempo sketches which he has always been fond of feel like they have a proper place thanks to the album’s faultless sequencing. However, as a whole it feels out of balance at points, the tongue in cheek characterisation and paper thin plot not quite ringing true against the accomplished nature of the accompanying music. When Hamill gets the balance right though, it’s sublime; the vocals of “When Your Love Feels Like It’s Fading” although still delivered with a sly nod and a wink, feel heartfelt enough to draw you right into Hamill’s world, while the impact of “The Love Quadrant” remains undiminished, its cascading chords and urgent funk still having the power to stop you dead in your tracks.

1. Feature Presentation
2. 2357 A.D.
3. Mr. 8040′s Introduction (Mikrosector-50, Mankind’s New Home)
4. Welcome to Mikrosector-50 (Home to Emptiness)
5. Confusion on the Armament Moon (Answers From Max)
6. When Your Love Feels Like It’s Fading
7. A Lonely Flight To EroDru-10 (Arrival on EroDru-10)
8. You Can’t Have My Love (Chance Diversion)
9. Rising (An Unwelcome Temptation)
10. Quadraskank Interlude (Return to the Love Quadrant)
11. The Love Quadrant (The Future Is Not For Me)
12. Back Through Time With A Mission Of Groove
13. Closing Titles (Who’s Closing In On Gaia?)