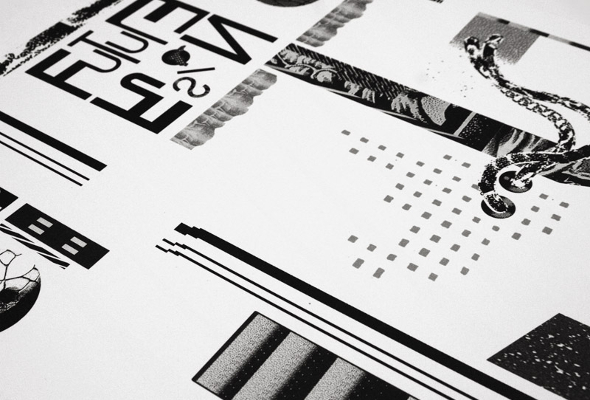 As Scott Wilson explained in his review, Welcome To Mikrosector-50 isn’t going to be everyone’s cup of tea, but for those turned off by its space opera narrative and clunky characterisation, there will be two more eager to immerse themselves in the producer’s world – something stengthened by his unique blend of Model 500 style techno and Tangerine Dream inspired ambience. For those who like their music to take itself a little more seriously however, there was Exai, the new album from Autechre which arrived in a striking 4xLP box set. It’s certainly not an easy album; charting more abrasive territory than their 2010 album Oversteps, it’s described by Juno Plus scribe Tom Banham as being “built from blocks that make little sense close-up, and yet once stepped away from merge into an awesome whole”.

However, these weren’t the only long-players of note this week, as Minimal Wave sub-label Cititrax put out two equally brilliant albums. We’ve been waiting for The KVB’s Immaterial Visions since hearing their appearances on Downwards, and its eight tracks make for the boldest, most confident statement thus far from the duo. Streetwalker meanwhile is the collaborative project of White Car’s Elon Katz and Beau Wanzer of Mutant Beat Dance/LIES fame, and their debut Future Fusions resonates with a loose, primal energy, sitting uneasily between house, industrial, synth-pop and EBM. Fitting in quite nicely alongside these offerings was the debut album from DVA Damas on the new Downwards America imprint, and although too short for our liking at just under 20 minutes, their canny concoction of subtle film references and delay laden industrial sounds is a thrilling ride from start to finish otherwise.

The Hype Williams duo of Inga Copeland and Dean Blunt’s new label World Music also saw is debut release, with Copeland herself providing an interesting solo turn in the form of Don’t Look Back, That’s Not Where You’re Going. Unusually sharp considering her muddy work as part of Hype Williams,  “So Far So Clean” offers a sparse and undulant pattern of quasi-percussion slices with Copeland’s mystical lyrics over the top, while on “A&E” Dutch kingpin Martyn takes on production duties for a darker Hyperdub influenced vibe. Meanwhile Martyn himself had his first full solo release in some time on Steffi’s Dolly Dubs; “Oceania” is as colourful as its name suggests, offering the kind of sub heavy bass pressure we’ve come to expect combined with bristling chimes, while the rolling, broken rhythms of “Newspeak” are probably the most club focused thing the producer has done, and “What Is Room 101” sees him going into deep house territory.

Similarly deep fare could be found in the third release from Yør on the ever impressive Purple Maze imprint; Sublimation was another exercise in dramatic and dynamic techno both hard-hitting and surprisingly limber in its execution, with the chugging chords of the title track barrelling into a high-speed tunnel of undulating noise providing a standout moment. Meanwhile recent Juno Plus interviewee Borai provided the first release on the new Argot affiliated label, Tasteful Nudes. More commonly seen alongside fellow Bristolian October, his first solo offering is an accomplished record whose sunny keys and delay laden chords are cleverly broken up with an unexpected use of the “Think” break on “Does It Bother You?”.

Pictures Music’s Dauwd finally followed up that impressive 2011 debut with Heat Division. The time out has obviously been well spent; sporting a more explicit house style, Heat Division nevertheless sees him stay within the post-everything bass sphere he started in, albeit taking the cliches and splicing them up in new and intriguing ways, with the dubstep inspired bass of “And” joined by some intricate use of texture and melody. However, the house record of the week was undoubtedly Marquis Hawkes’ second outing on Dixon Avenue Basement Jams, with the Higher Forces At Work EP providing a similarly steady take on the ghetto house template established on his debut, with the strung-out, rubbery house of “Automatic” a stand out moment.

Fans of wonky techno were well served this week; top of the pile was a one-sided blue marble 12″ of “Anti Illuminati Egyptian Trance House” on Unknown To The Unknown from Portuguese duo Photonz, with the tumbledown rhythms of “1551” proving the most infectious thing this week. JTC’s new Park Days EP on Hoya:Hoya came a close second though, with the skewed melodies of “Creal” standing out for their unbridled energy.

Those with a propensity towards the classic sounds of Sheffield meanwhile were well served by the Black Dog’s new EP The Return Ov Bleep, whose light, sparse take on techno were the complete antithesis to Hieroglyphic Being’s latest opus Imaginary Soundscapes 9 was an expectedly abrasive trip into Jamal Moss’ bizarre soundworld. Harder hitting techno however was in abundance; Prime Numbers recent remixes of Trus’me and Nick Sinna, from the likes of Marcel Dettmann, Terrence Dixon and Ben Klock, were all collected in one mammoth package across three LPs and a CD, while similarly great remix action could be found in Marcellus Pittman and Urban Tribe’s reworkings of Nina Kraviz.