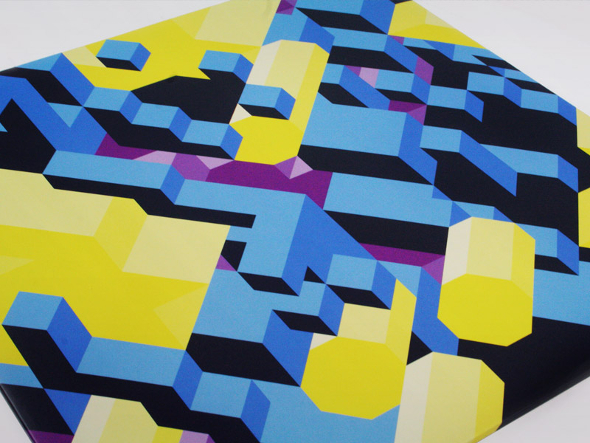 Without a doubt, the pick of this week’s bumper crop of records was the debut album from Function.

It seems incredible to think that despite his nearly two decades of production experience, Dave Sumner hasn’t released a full album until now. Thankfully Incubation was well worth the wait, combining dystopian sci-fi soundtrack textures with the precision techno he’s become known for, with opener “Voiceprint” painting a particularly vivid picture with its swathes of neon and threatening bass undercurrent. It was a stark contrast to William Burnett’s adoption of the Black Deer alias for Trail Of Tears, the latest title to grace Rush Hour’s intermittent “No Label” series which saw the New York producer offer a more experimental side, being the results of some experiments with “12 string acoustic guitar with effects and synth”.

Joining those as the most atmospheric releases of the week was the long awaited return of Bristol duo Zhou, whose new record (complete with tasty full sleeve art from Tape Echo) saw two variants on classic West Country dub dread; “Locust Tree” that sounded like Shackleton’s early material stripped of its flesh and left nothing but clattering bones and “Locust Dub” which added a steppas rhythm and pulsing low end. Not counting Zhou’s masterclass it was one of the best weeks for bass we’ve had in some time. The long running 2nd Drop label released their Future Foundations compilation across three 12″s, with names like South London Ordnance, LV, Djrum and Youandewan all contributing; our pick of the tracks however was from the consistently impressive Alex Coulton, whose “Grande Swing” offered a meaty piece of swung dub techno full of rugged drum machine manipulation.

This week also saw the first release from Trax Couture, the new label from Fools & Rushmore, whose House Of Trax and Rhythm Talk nights are now some of London’s most talked about parties. Their appreciation of juke, ghetto house and ballroom is perfectly encapsulated in this production debut from Rushmore, with final track “Couture” occupying the sweat filled crawlspace between juke, ballroom and booty house. It was a release well complimented by Fade To Mind’s new record from label head Kingdom. Culling tracks from Kingdom’s excellent VIP Edition CD, this 12″ sampler brandishes the thumping ballroom houser “Fukin Jaker”, the highly sought after bedroom rap joint “Appetite Edit” and a full blown remix of Ciara’s “Goodies”.

Seguing nicely into this week’s house releases, Night Slugs main man L-Vis 1990 made an appearance on Clone’s Jack For Daze imprint with the Circuits EP, featuring four jacking Dance Mania influenced tracks picking up where his Club Constructions Vol 1 release left off. Midland also returned to Aus with the similarly rough and ready jacker “Trace”, and “For (Yacht) Club Use Only”, both of which saw him move away from the more melodic productions we’ve come to expect from the producer. Meanwhile Don’t Be Afraid released the new EP from Alis, the producer formerly known as Subeena. Azimuth slots nicely in the DBA canon of deep but danceable house and techno, with glistening chords contrasted with sinewy basslines in “Imperium” and the churning arpeggio of the title track joined by some particularly industrial 80s rhythms. Axel Boman also arrived on Hypercolour with the fabulously named Black Magic Boman EP, with“Television People” standing out with its uneasy synth lines, oddball speech and gently simmering drums, while Theo Parrish completists will be pleased with this week’s pair of reissues, with his classic track “Falling Up” and accompanying Carl Craig remix both pressed up and remastered by Third Ear, and his classic Sound Sculptures Vol 1 repressed on to triple vinyl courtesy of his own Sound Signature label.

As ever, techno enthusiasts will be lamenting the ever decreasing size of their bank balance with this week’s releases. Lucy and Silent Servant is a collaboration that makes complete sense on paper, and thankfully the first fruits of their union on Mote Evolver lives up to its promise; using digital and analogue elements both “Dormancy Survivors” and “Victors History” combine Lucy’s penchant for the cinematic and Silent Servant’s precision. Lucy’s Stroboscopic Artefacts associate Xhin turned in a similarly detailed batch of broken dub techno killers for Belgian imprint Token on Dark Tiled Landscape, with primordial, gurgling textures and nightmarish swirls of dense textures making for a claustrophobic listen; on a similarly dark tip was a revisitation of Ventress’ “Typhon” on Edit Select, which got suitably minimalistic reworks from Semantica boss Svreca and Prologue’s Abdulla Rashim.

For those more inclined to Detroit style techno, Robert Hood’s “Drive (The Age Of Automation”) from his recent Nighttime World 3 album got a full side of wax to itself, with Token artist Phase obviously revelling in the opportunity to provide two brilliant reworks of the track; the “Nocturnal Mix”, which isolates the original’s bass stabs and incorporates them into a rolling juggernaut rhythm tailor made for the warehouse, and the “C-Box Mix” which opts to keep the melodic elements but pare them back with the producer’s trademark sharpness. Berlin label Killekill also returned with the excellent Sonic Criminal EP from Spectral and Creme producer Tadd Mullinix under his JTC alias, filled with hypnotic deep techno jams, simmering acid tones and primal mid-tempo Jak, while Third Side released another remix EP to complement their Unified Fields album, with Virginia, Morphosis (as RaH) and Marco Shuttle all getting their hands on “Shit On Me”.

The similarly raw DJ Spider swiftly followed up that killer recent SubBASS transmission with an equally good plate for his own Sublevel Sounds label. The Night Gallery 12″ has Spider collaborating with Phil Hoffa on two productions and each producer also offers a solo effort with the results occupying a murky, uneasy space in the analogue techno spectrum, with the second Moffa and Spider cut “Golden Dawn” sounding, in a word, mental. It’s unhinged nature was only matched by the latest release from the Photodementia project, who returned with another seven tracks of industrial and electro infused techno that gleefully ripples with neck snapping rhythms

Heading up this week’s digital releases was the second release in Bleep’s Green Series, with a single split between Objekt and Cosmin TRG. A new Objekt track is a rare thing, but the frenetic, caernous “Shuttered” easily maintains the high standard of his previous work, while Cosmin TRG’s “Shuttered” complements it perfectly with its dank acid mood. Also highly recommended is the latest Unknown To The Unknown transmission, featuring the talents of DJ Q in his Classified guise with a host of similarly minded characters, bringing another set of the label’s trademark garage bangers. Archie Pelago also followed up that excellent Mister Saturday Night release with a new single for Brighton’s Well Rounded posse, with the breezy tones, saxophone, guitar and vocal of “Subway Gothic” joining the more subdued but free-flowing “Ladymarkers”. These were joined by strong albums from Karen Gwyer, Autre Ne Veut, and the Thom Yorke helmed electronic supergroup Atoms For Peace.