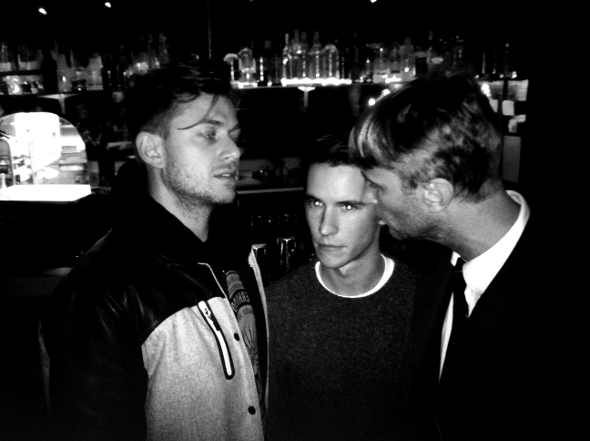 Say hello to Man Tear, a group formed of Studio Barnhus pair Axel Boman and Petter Nordkvist and frontman Johan Jonason who will be surfacing on DFA Records next month.

As founding members of Studio Barnhus alongside Kornél Kovács, Nordkvist and Boman have established the Stockholm based label as an outlet for electronic music driven by a clear sense of humour – see HNNY’s Mariah Carey riffing “I Want To Know What Love Is” for the most compelling evidence to date. Nordkvist and Boman are also no strangers to working together, having completed several remixes under the Salax Peep Show name.

Man Tear has been on the boil for some time, founded originally by Boman and Johan Jonason who are in fact cousins, before Nordkvist later joined the project. Musically, the forthcoming Amore Outside 12″ eschews the house approach the Barnhus pair are renowned for in favour of what’s being described by DFA as “a trilling slab of spacious disco” dominated by the tremulous vocal talents of Jonason. Speaking with Boman earlier this week, the producer laid out the genesis of the Man Tear project in full:

“I have been making music with my cousin Johan for years; some years ago we asked Petter to join our “group” to add some structure to it. Thats when we got our name also. Johan is an award winning Swedish film director (recently he won a “guldbagge”, Sweden’s most prestigious film award for his short film Dance Music Now that features Man Tear music) and a great vocalist/stage persona.”

“The track we are releasing on DFA comes from a two week long session in Bohuslän on the Swedish West Coast last year. There is a grand vault of strange yet beautiful and escapistic dance music by Man Tear waiting to erupt, we are not in a hurry and we are deciding on how to go forward. DFA was our first choice to release on and we are very happy they like us back.”

Of course, their label Studio Barnhus remains as busy as ever and have announced Nordkvist soon will be donning his Pedrodollar alias for a forthcoming collaborative release alongside Norwegian soundbwoy killa Boska on the Studio Barnhus coloured 10″ series that drops on March 18.

DFA Records will release Outside Amore by Man Tear on April 1. 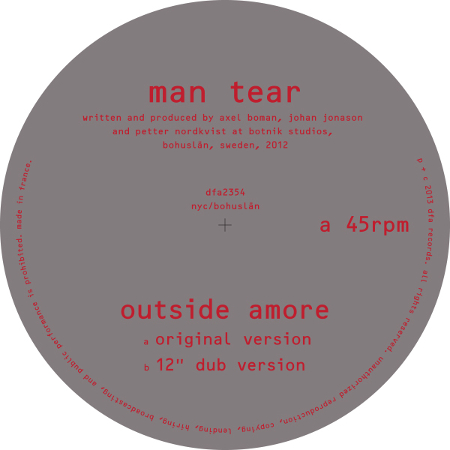