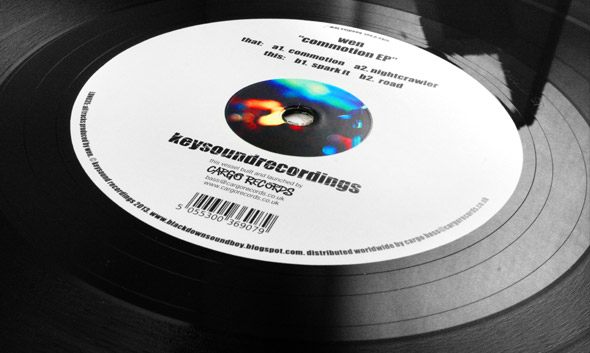 You can always count on Keysound to instil some renewed vigour in the dubstep and grime scene with their signings and releases. From the LHF collective to Beneath, Dusk + Blackdown’s recent discoveries have been as exciting as the first strands of musical DNA that came trickling through from the bosom of FWD>> and DMZ.

Tradition and upheld values are of course fundamental in a scene such as this, and the purest of modern continuations of the dubstep sound make no secret of the torch they carry. The unifying aspect is one of minimalism and dread, dodging the warmth of melody and the distraction of complex beats in favour of spacious pressure shaped by nail-biting tension and the simplest of ingredients.

Wen is as quintessential an exponent of this methodology as any, and on this debut release they display a fearsome hold over true-school dubstep dynamics, regardless of how long he or she may have been making music prior to this first appearance. There’s a common theme across the four tracks, largely defined by the sparsest of beats and a fresh approach to dropping vocal samples. Instead of naff R&B rips or outright irritating lyrical flows, Wen instead reaches for displaced snatches of grime bars, firing MCs off erratically without finishing their sentences. Stark and unprocessed, the vocals sit heavy in the spartan context, which only serves to further their impact.

Production-wise, there isn’t any scope for criticism of Wen’s work either. The key for any dub-led music is a mastery of space, and you need look no further than the opening title track to hear the subtle synth touches echo out the territory in which the track resides. It’s a vast expanse, every fleeting hit and drone brushing the edges so as to not interrupt the monolithic sub and drums that dominate the centre of the mix.

“Nightcrawler” is a little more busy in its execution, firing off grimey wobbles of string and synth while the beat pops with dexterity, but this is still very much music with breathing room and you’re left feeling a mild sense of agoraphobia creeping up your neck. “Spark It” actually quells this paranoia in part with the fullness of the musical kick drum that pounds out underneath. However there’s not much else to cling on to, as once again wraith-like swells come drifting past with the sole intention of creeping you out.

Neatly rounding off a startlingly strong debut, “Road” stalks into action with a promise of soundtrack intensity. Sure enough it comes on heavy, from brass swells to bottom-end string stabs that, along with the snatches of “hoodies down low” lyrics, paint a picture of urban malaise as powerful as any of Burial’s most evocative works.

It may not be a brand new approach to electronic music, but Wen is making tunes unconcerned with such issues. What Commotion does achieve is to continue the legacy of gritty, pared-down, bass-driven music in true fine style.