Prurient – Through The Window 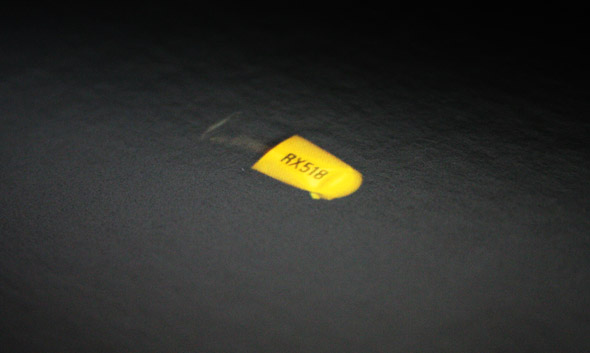 Nothing is ever easily decipherable with Dominick Fernow’s music. The man who disguises himself under the Prurient moniker certainly has a knack for the positively opaque in every sense of the word.

From the tenebrous sonic interferences of his more recent Vatican Shadow alias, a side of his personality left primarily for socio-political-technoid infusions at their most rapacious, to the haphazard release strategies of his own works which seem to flutter unpredictably between tape and LP formats, we’d have little or nothing to go by about Fernow’s mind if it weren’t for the inconspicuous shock-factor usurping from even the most gentile of his productions.

Fernow has taken the same approach with his own Hospital Productions label, which has come to house similar minds within the ever shapeshifting minefield of quasi-beat-driven noise such as Kevin Drumm, Lussuria and Silent Servant. But what lends the imprint such an incontrovertible singularity is its approximation to various facets of experimental music, most vividly noise, techno or even post-punk, in a manner that’s both subconscious and resolutely natural – an honest representation of a long and convoluted musical heritage on the part of all its artists.

However, there is one other home to which Fernow has become associated with in recent years, or more specifically, one which is equally welcoming of his mordant musical fascinations. The cavities of Kiran Sande’s Blackest Ever Black seem like the ideal home for his meandering shards of techno, a label which similarly dwells on the tension between punk-fuelled electronica and noise-buffered 4/4 music. Perhaps Sande understands that this aptly named Through The Window album can serve as a faint glimmer of light between its listeners and the bleak stratosphere that so graphically shells Prurient’s music. In fact, the LP’s structure could almost be interpreted as a homage to both Fernow’s background as a noise artist and the techno world that he’s so wholeheartedly embraced over the last few years – two pillars which have fused so effortlessly that they’re now becoming part of the same percolating unit.

The opener and title track is simply too broad and cinematic for an immediate satisfaction of the senses. This in no way implies any criticism of its various morphing particles, but it’s near twenty minute impetus towards the inevitable cascade of all-out destruction requires the right sort of concentration to properly bask in its protrusive glory. Sure, it is techno, but only in so far as it’s a fluxing beat construction with a throbbing pulse which courses shamelessly to the command of Prurient’s wailing synths; its elegantly gliding set of filtered harmonics itching to engulf just about every other shred of sound in its path, from the inevitable backdrop of noise feedback to Fernow’s own capricious vocal injections. The componential diversity and musical affluence almost reduce the appearance of its length and leave us only with a warm and palpable feeling rather than a vivid memory of all its different segments.

“Terracotta Spine” almost feels like a junction between its two longer bi-products, adopting a rather cynical yet comforting oscillation of sounds which somehow find their own harmonious momentum amid the inevitable chaos that is brewing fervently within, and although we’re in no way predisposed to fully disentangle its intricate web of despair, it serves as the LP’s most candid moment. The track stands as a veritable half-way house between both Fernow’s and Sande’s magnetism towards edgy, industrial post-punk and techno – two genres which have entered an explicit love-affair thanks to their respective musical freedoms, and which are manifested herein by a clanging bundle of percussive slices and strangely lyrical, noise-filtered vocals.

It’s no surprise that Fernow has saved “You Show Great Spirit” as the final part to this un-intermittedly wavering collection of works, as it represents both the LP’s most euphoric moment and a re-submerging into his cryptic use and abuse of melodies. The calm and mystical flutters of chords which dominate the whole ten minutes are set against a hostile glare of FX, and although they merge with ease into the more immediately placeable slots of kicks and hi-hats, we’re left with an inevitable sense of ambiguity and marvel from the whole affair – but then again, there would be no other way to scrutinise Prurient’s music.

A1. Through The Window
B1. Terracotta Spine
B2. You Show Great Spirit