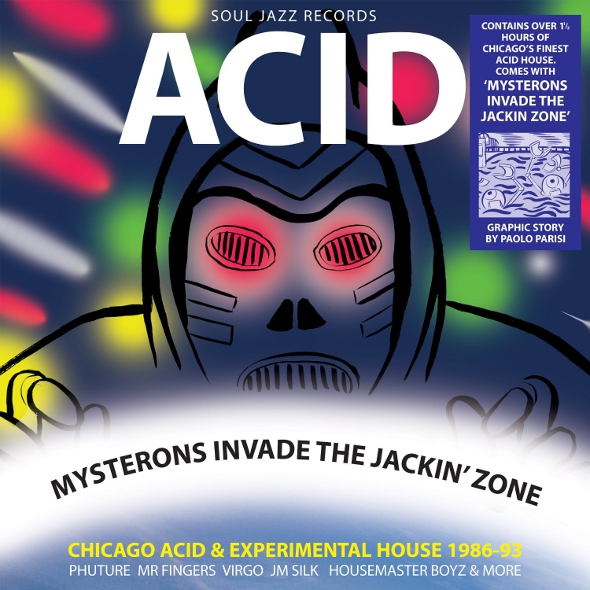 Reissue specialists Soul Jazz have announced details of their next project, collecting classic cuts from the heyday of Chicago’s acid house scene.

As Resident Advisor report, the compilation will be entitled Acid – Mysterons Invade The Jackin’ Zone: Chicago Acid and Experimental House 1986-1993; from the look of the distinctive artwork and name it seems to be a spiritual follow up of sorts to Soul Jazz’s 2011 dub compilation Invasion Of The Mysteron Killer Sounds, featuring the likes of Armando, Larry Heard, Virgo, Adonis, and Phuture, whose 1987 12″ Acid Tracks is widely held to be the track that gave the genre its name.

Although none of the tracks on that seminal record appear on the compilation, classics such as Adonis’ “No Way Back” do, alongside lesser known fare like Cool McCool’s “World Turns Around”; as the compilation’s name and timespan suggests, tracks that aren’t acid house in the strictest sense of the word will also appear, including early Chicago house classics such as Mr Fingers’ “Can You Feel It” and Risqué Rythum Team’s “The Jacking Zone”.

As with all Soul Jazz compilations, no expense has been spared with regards to the package surrounding the music; as well as some rather striking cover art which depicts what looks like a robotic MF Doom, both double CD and 180g vinyl versions of the compilation will come with a graphic novel by artists Paolo Parisi that tells the story of Chicago house, we imagine with some degree of dramatic license. The music itself is digitally remastered, while stickers and postcards are also included.