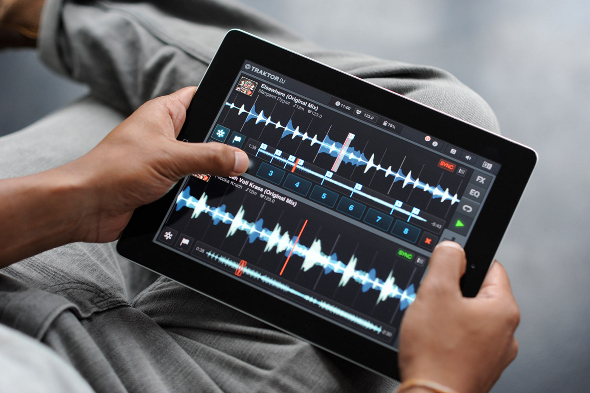 Known as Traktor DJ, the app is being aimed at both beginners and serious users of the software, with the option to use the app as a full standalone DJ device and as an integrated extension of Traktor Pro 2. Like the myriad collection of iPad DJ apps already on the market, Traktor DJ features a 2-channel mixer and two fully-featured virtual decks, each with dedicated 3-band EQ and filter sections, with the famous Traktor sync engine; like its bigger brothers, the App scans your iTunes media library and allows you to browse it like a virtual crate.

Traktor’s waveform section is fully intact, and on the iPad screen a more tactile proposition; swipe and pinch gestures are used to scroll through and zoom in on tracks, while loops and cue points can be easily added on the fly. The most intriguing feature however is “Freeze Mode”, which allows the user to slice a track into playable parts and remix it on the fly.

Traktor DJ also integrates with Traktor Pro 2; those who want to use the iPad app to set cue points on their tracks will be able to do so and sync their changes to Traktor Pro 2 via Dropbox, and vice versa, while the app also allows use of Apple’s iPad Camera Connection kit, meaning users with a Traktor Audio 6 or Audio 10 interface will be able to make use of high-quality audio output and headphone cueing. Those wishing to see the app in action can see it in the video below, featuring Traktor’s staunchest advocate Richie Hawtin.