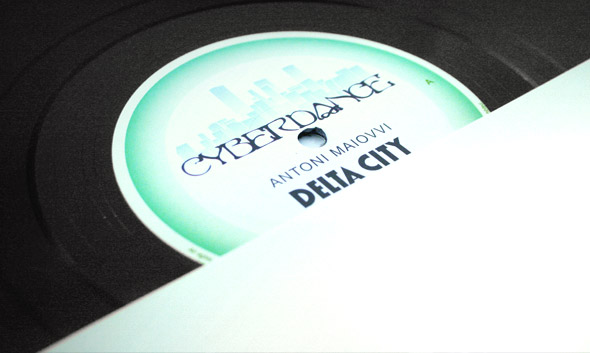 Awash with the heart-on-sleeve romanticism of Italo and seeking to push it into new realms, Antoni Maiovvi has working hard for his passion across labels as diverse as Seed, Caravan and the dormant Kompakt offshoot Fright, with releases reaching back some five years. In many ways Italo is a staunchly unfashionable sound, over-archingly camp and joyously brash where so many feel more comfortable with subtlety and moodiness.

There’s no resisting the call of those slamming arpeggios and soaring sound effects once they start thrumming though, although Maiovvi has crafted a curious space for himself within the rigid form which looks not to create purist dancefloor experiences. Of course that inherent romanticism has always lent a more esoteric edge to Italo, but with this release for Cyber Dance and much like his previous bombastic The Thorns Of Love, Maiovvi seems intent on creating a narrative that cannot be contained by a simple dance track.

This is not to say that both “Impulse” and “Requiem for Clarence Boddiker” are not suited to club play. They both pound down with that staccato urgency, and equally rise and fall through moments of intensity and serenity. It’s just that, at 12 and 11 minutes respectively, both sides of this record have ample room in which to tell a more involved story.

Maiovvi’s back catalogue is steeped in cinematic reference points, and as such his tracks reflect soundtrack-friendly dramatics, which sits more than comfortably with Italo’s histrionics. From the tense, scene-setting lead-in on “Impulse” to the swaying half-step breakdown that comes a third of the way in, sequences within a single track are deployed like plot devices, waiting for the next burst of action to send the synths soaring and drum machines pounding once again.

The Robocop referencing “Requiem For Clarence Boddiker” is more ostensibly a club cut with its consistent forward-momentum, side-stepping the more flamboyant peaks and troughs of its predecessor and riding the same uptempo rhythm throughout. However, still in those multifarious layers of sound, a rich tale is told. From the heavenly choirs to the searching lead synths, Maiovvi’s vernacular is as descriptive as a screenplay.

If you were never sold on Italo then this record will do nothing to change your mind, but if you love the pomp and splendour then Delta City will bring you untold amounts of joy across 23 sweeping minutes of hi-octane electronic goodness.

A1. Impulse
B1. Requiem for Clarence Boddiker