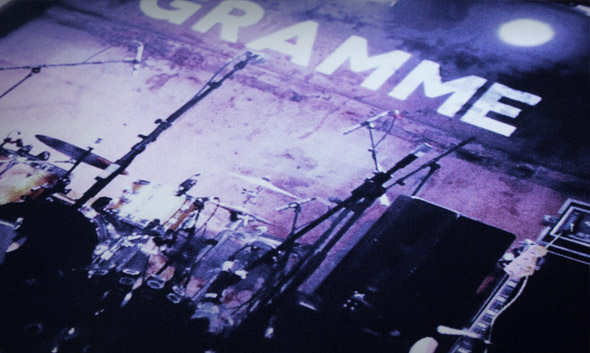 It’s easy to forget how strong the surge of punk-funk was back in the early noughties, as a clutch of bands largely orbiting around DFA went nuts for the angular, disco-informed grooves of the New York no wave scene and delivered a momentary revival of the form. In its best instances it was killer dance music executed with deadly precision on live instruments, not least from outfits as hedonistically rooted as !!! or early Spektrum.

Gramme were actually a little ahead of the curve with their Pre Release EP on Output back in 1999, and they would have all but disappeared were it not for the grinding, sleazy perfection of “Like You”, a tune that wriggled and writhed in a greasy mess of funk. That tune continued to hover as something of a secret weapon that everyone was in on, and obviously over a decade of murmuring has finally caught the band’s ear and they reformed last year to issue a trio of EPs on their own Physical Release Recordings.

Now collecting together those singles, Tummy Touch Records have taken the plunge and backed the bands first album. Of course after such a gap in releases the first thought on your mind is: how age has affected them? Rest assured, the same gift for essential funk dynamics is still very much present on Fascination, not least in the ice-cold bass licks that form the undercarriage of the tracks. “Too High” is a simmering floor rocker peppered with touches of electro while “Girls Talk” shakes with the loose-limbed DIY aesthetic of Maximum Joy and any other number of female-fronted late 70s post punk bands.

“Rough News” moves a little forward in time, capturing a more refined mid 80s new wave approach (not least in the gorgeous delayed guitar chops), and “Fascination” slides down into one of those slower slink-outs that you might expect of that era as well. It’s the closing two tracks that bring things more up to date, leaning on house construction and a more accessible sound, and it’s where the edgy strength of Gramme falters somewhat. “I Feel The Moment” calls to mind Tom Tom Club or Chicks On Speed with its chanting female vocals, and in the context of the slick synths and steady disco beat it starts to sound a little too saccharine for the sound Gramme tend to be reaching towards. Likewise “It’s Magic” gets a little too bombastic in its chorus, diluting the underground intensity of the majority of the album.

Bar such faint whispers of softened edges though, it’s a sterling return for Gramme that sees them upholding the values they started out with, even if a little of the grit and dirt has been wiped away. As this review highlights through its reference points, theirs is not an album to reach for to hear something new. Sometimes a band just needs to be a band, without the need to reinvent as much as reinterpret. If you’re into the sounds of post punk, funk, no wave and disco then the chances are you’ll be happy to hear a group nailing that sound with deadly precision.