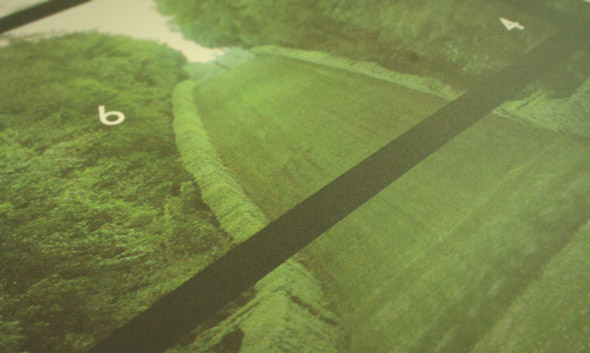 The week was begun with the surprise announcement of Levon Vincent’s return to his Novel Sound imprint for another 12″ of the producer’s very singular house music – but it didn’t last for long.

True to form, that release – along with the first sampler for Nonplus’s Think and Change compilation featuring Boddika & Joy O, as well as Kassem Mosse, promptly sold out. However, another equally big record landed and has seen fit to stick around a little longer. The fifth release on Blawan and Pariah’s She Works The Long Nights imprint comes form Trade, a pairing of Blawan and UK techno royalty Surgeon, and it’s unsurprisingly brilliant; displaying traits of classic Downwards material, Plastikman and even A Made Up Sound, its highlight coming in the form of “Touch This Skin”, with a loose, tracky rhythm that dangles like a flayed man hanging from the gallows.

The strikingly simple artwork for that release was beaten only by that in the image above, which comes from 1694, the vinyl release from Alex Egan’s Draughtsman alias on How The Other Half Lives which originally arrived digitally last year on Tim Paris’ Marketing Music. In a climate of “me too” bass producers and unimaginative Kerri Chandler rip-off house, the thick, melody soaked grooves of 1694 – which seem to take their cues from the smacky disco of Cosmo Vitelli and the kosmische of Cluster – are a breath of fresh air. Great remixes from Vitelli himself, Roman Flugel, Tim Paris and Daniel Avery seal the deal.

A similarly idiosyncratic record came from Danny Wolfers (who must be averaging a record every two weeks at the moment) in his Nacho Patrol guise via Mike Simonetti’s fledgling label New Jersey. The opener and title track of Cimmerian Funk, sounds something like a demented version of the Doctor Who theme meeting the funk drums of The Stone Roses’ “Fools Gold”, while squealing Dr. Dre synths may have been some of the inspiration behind “Nubian West Coast”. In the week where Live At Robert Johnson announced their first label compilation, they also dropped the latest EP from label regular Massimiliano Pagliara, with the sparkling 80s sheen of Magic Serials paying titular homage to the serial numbers of the equipment used in the production of the tracks, with the resulting titles reminiscent of Andreas Tilliander’s recent work under the TM404 alias.

This week also saw the return of NYC-based producer Policy who brought his old school combination of shuffling drum machines, classic NYC electro and submerged funk to the Argot label with the Hit Gone Bad EP, with a title track whose trippy nature is delivered thanks to twinkling and transposing percussion and quick fire flashes of disco that shoot across its bow. Parisian clubbing institution Concrete also released its first of three planned Textures releases inviting local talent and previous guests to contribute. The first volume inaugurated the label in style, brandishing original productions from the excellent Jared Wilson, Awanto 3 and Nsyde artist Samuel Andre Madsen as well as Parisian producer S3A (Sampling As An Art). “Sit On This” provided a typically dusty slice of house from Awanto 3 which contrasted nicely with the percussion heavy classicist house of “The Ravist” by S3A and the deep acid of Jared Wilson. FXHE also got round to issuing a vinyl version of Keep On, the excellent long player from Luke Hess released late last year. While it has plenty of dub-flecked moments there’s a greater reliance on melody over mood, moving from hypnotic deep house to robust techno via beatless interludes, its easily his most accessible set to date.

For those of a bassier concern, the ever-reliable Hessle Audio came through with “Raw Code”, the collaboration between Bristolians Peverelist and Kowton that featured on Ben UFO’s Fabriclive 67. Sporting the kind of instantly recognisable string bursts that have characterised Kowton’s recent crop of grime influenced techno productions, together with a bouncy yet mechanical groove dominated by a weighty sub bass, it might just be one of the most unconventional club tracks of the year. It was only narrowly edged out of our affections by the incredible second release from former Hessle talent Bandshell, whose Caustic View EP landed on Mute sub-label Liberation Technologies this week, with a name that seems only too appropriate given the sonic quality of lead track “Winton” which sounds like Metasplice remixing Maurice Fulton’s Syclops project. Finally, Night Slugs followed up their essential second label compilation with a sampler featuring talents of Girl Unit and Morri$, whose “White Hood” contains a massive 808 undercarriage complete with unique blend of accordions, skittering hi-hats and snare rolls.

Top of the download pack this week was the digital version of FCL’s “It’s You”, which arrived, surprisingly enough on Defected, following the scandal of the original vinyl-only version changing hands for silly money on Discogs. Those looking for something a little meatier however should check the new album from former Hyperdub signings Darkstar, who made the jump to Warp for their new album News From Nowhere, featuring a far more advanced range of sounds embracing more organic elements alongside a penchant for warm, fuzzy electronics. On a similarly idiosyncratic tip, Sonic Router tapped up Hav Lyfe for their latest self-titled release, whose singular take on downtempo musings, overdriven, misshapen beats and curious melodies should appeal to Brainfeeder fans everywhere.

Minimal Wave also unleashed a new album of minimal synth delights from In Trance 95, with the previously cassette-only Shapes In A New Geometry providing the Greek outfit’s first new material since the 80s, while reliable London-based imprint Local Action released the latest single from one of the UK garage scene’s best contemporary producers, DJ Q. Those looking for some more severe sounds meanwhile were well catered for, as Perc Trax released Mondkopf’s monolithic industrial effort The Nicest Way, and Mancunian duo AnD delivering the kind of bassline that Luke Slater might contemplate if he was in particularly bad form on the third Features volume on Repitch.