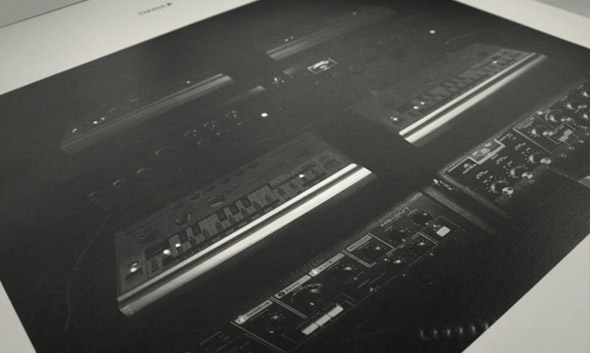 This week’s two biggest records resulted in an extensive testing session of the Juno office hi-fi’s subs, and the one that arguably caused the most damage was the new record from A Made Up Sound.

Dave Huismans is always a producer guaranteed to confound your expectations, but his eponymous imprint is where the real crazy stuff seems to land, and we’ve been eager for another since the eardrum splitting “Take The Plunge” back in 2011. Thankfully this hand-stamped return to the label is no disappointment; “Ahead” is a broken combination of industrial rhythms and breakbeat-inspired sampling, while the B-side, entitled “Endgame” is a more conventional techno number, made no less furious thanks to its Underground Resistance undertones, serrated bass and malfunctioning drums. Similarly heavy was Anthony Naples’ new Mister Saturday Night drop, Moscato. Paying no (mad) disrespect to Shed or gritty ’90s retrospective house and techno music, “Moscato” – the A-side version – combines the snow capped hats of WK7’s “The Avalanche” with the ground down piano stabs of Head High’s “It’s A Power Thing” and the rolling motion of Alden Tyrell’s “Rush” from Clone’s Basement Series.

The mighty Night Slugs also returned this week with the long awaited second Night Slugs Allstars compilation. As expected it’s a typically brilliant journey through their technicolour world; at one turn you can be doused in the blinding sunshine of Girl Unit’s cheery electro as on “Ensemble (Club Mix)”, or at the next be confronted with the staggered stab frenzy of Helix’s somewhat ironically named “Drum Track”. Try reaching them without being thrown by Bok Bok’s 31st century grime madness or Lil Silva’s hyper-kinetic throwdown of mechanical psychedelia and you might have a chance of getting a handle on the label as a whole. Add to that the low slung 4/4 roll and gut-wrenching bottom end of Beneath’s new plate for Tectonic, and you have a good week for bassbin-bothering all round.

As is increasingly the case, much of this week’s excellent music came adorned with brilliant artwork. Famed Cestrian robot Ali Renault launched his new label in style with a limited hand-stamped release; “Infinity Eyes” proved to be a meaty analogue stomper with a gritty, freestyle bassline that sounds like it’s been massaged out of an 808. Livejam affiliate EMG’s Experiential Learning imprint is also no stranger to intricate label art, with the label’s handpainted third release proving another delight. While previous Experiential Learning efforts were decidedly in the experimental camp of analogue production, this record’s A-side is hardware techno at its best, with the crazed hoover bass of “Warning” on the B-side is like the Analogue Cops doing classic Belgian rave. Meanwhile Gerd Janson’s Running Back delivered Traffic, the label debut from evergreen producer Oliver Ho under his Raudive alias with a fetching beekeper themed cover; expect muscular EBM and house workouts with the detuned pianos and manipulated vocals of the title track likely to garner considerable attention.

As ever, it was a prolific week for techno with a clutch of records to choose from. As well as the return of Andy Blake to production duties, this week saw the release of the new album from Andreas Tilliander under his TM404 alias. Well regarded for his musical endeavours as Mokira with numerous albums on labels such as Kontra, Raster Noton, Type and Mille Plateux his debut album as TM404 contains eight polyrhythmic productions apparently recorded live in one take without any post arrangement using a combination of Roland gear, including the TB-303, TR-606, TR-7-07, TR-808 and MC-202 drum machine, creating a suite of surprisingly organic techno in the Morphosis vein.

Delsin’s house series continued with the surprisingly heavy sounds of Parisian producer Low Jack, with thwacking wood block percussion and militaristic snare rolls the order of the day on “Free Pyjamas”, while STL dropped his latest missive on Something, with expectedly loose, deep grooves making up Banned From Terra. A pair of remix 12″s rounded out the week’s best techno; usually we have reason to be suspicious of remix packages, but these were definitely high end affairs. Barker & Baumecker’s album got the remix treatment on Ostgut Ton from Blawan, Machinedrum, Kobosil and Third Side, with the ritualistic drum swagger and orc war-horns of Blawan’s re-command standing out for particular praise. At the other end of the spectrum, Stroboscopic Artefacts duo Dadub teased their fothcoming album with Preternity, a collection of the album’s tracks reworked by Lucy, Lakker, Rrose, and Kangding Ray.

Those looking to stray into more melodic territory meanwhile should look no further than the excellent Sunshine Mills from Bristol duo Outboxx. One of the emergent Bristol house scene’s most interesting talents, their productions of Outboxx inhabit a more classicist zone, somewhere between Chicago-inspired jack and 90s UK house nostalgia; this 12″ offers a taster for their forthcoming self-titled debut album on Idle Hands, the title track combining vibraphone, jaunty piano chords and good time vocals into what should rightly be soundtracking this summer’s rooftop raves. Those of a slower persuasion meanwhile should check Ruled by Passion, Destroyed by Lust, the fine debut of The Asphodells, Andrew Weatherall’s latest collaboration with close friend and creative foil Timothy J Fairplay. The album displays its dark underbelly proudly, but there are more than enough shards of light to inspire those salivating after the bold melodies of Two Lone Swordsmen or the naive, child-like bagginess of Weatherall’s Screamadelica era work.

In the digital realm this week there was one release that had us seriously excited: the return of Mr Maurice Fulton’s Syclops project. Predictably, A Blink of An Eye is a bit good. Picking up where the previous album left off, it delivers a warped fusion of titanium-plated electronics, leftfield acid jack, freestyle jazz flourishes and intergalactic mutant disco. Formidably twisted but hugely enjoyable, it gleefully charges off in many different directions, mixing shirts-off anthems (see the brilliant “Sarah’s E with Extra P”), with curious percussion jams (the afro-centric “Jump Bugs”) and curiously blissful, Boof-ish excursions (“5 In”). Another big return came in the form of The Knife, who previewed their new album with “Full Of Fire”, a cacophonous parade of ricocheting snares and abundant swirls of mutant bass, with 80s-inspired post-punk vocals melting elegantly over a shape-shifting percussion arrangement.

Those seeking some futuristic bass persuasion were well served with the debut of Koreless and Sampha’s Short Stories project on Young Turks, a pair of Jesse Boykins II remixes from Jacques Greene and Machinedrum and the new album from Synkro on R&S offshoot Apollo.