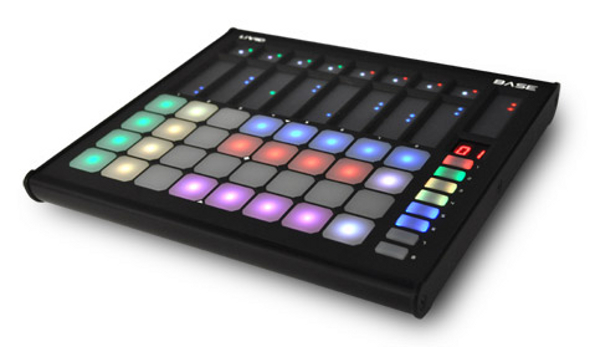 Livid Instruments have revealed the latest addition to their growing family of versatile controllers in the form of the Base.

Coming across as a intriguing hybrid of design elements that seems, in part, a response to Native Instruments’ Maschine and Novation’s Launchpad and Twitch DJ controllers, the Base is characterised by its nine touch sliders and 32 pressure sensitive pads. Like the Maschine MK2 and the forthcoming Ableton Push, the Base’s pads are illuminated with RGB lights, allowing plenty of scope for beat making, sample triggering and step sequencing on the fly.

The key feature however are the touch sliders similar to the jog strips found on the Novation Twitch controller; as well as featuring their own LEDs which provide feedback for the current value, the strips are capable of delivering notes and velocity when hit, allowing sounds and effects to be triggered as well as simply changing volume parameters.

Like Ableton’s forthcoming Push, the Base seems to be set up for live performance as much as studio work; the touch pads for instance are intended to be used for synths side by side with drum samples. However, like all of Livid’s bespoke controllers, the Base is fully configurable to work with any application or other Livid controllers, which makes it a worthy competitor to the Push – which will only work with Ableton Live 9.

Livid will release the Base in March at a price of $399; full details and specs are available at the Livid website.