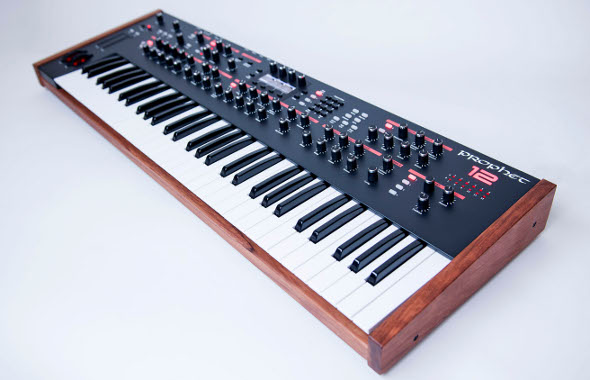 The legendary Dave Smith Instruments have unveiled their most advanced polyphonic analogue synthesiser to date, the 12-voice Prophet 12.

Usurping the Prophet ’08 as the company’s flagship model, the Prophet 12 is supposedly built from the ground up with an all-new voice architecture rather than being based on previous designs. It expands on its predecessor with an extra four voices, bringing the polyphony count from 8 to 12, meaning the Prophet 12 has the greatest polyphony of any synth Smith has designed; the veteran engineer has described it himself as his “best synth yet”.

The unit’s sound shaping capabilities it looks to pretty fully featured; each voice features four oscillators capable of generating classic and complex waveforms, a sub-oscillator, resonant analogue low- and high-pass filters, and analogue VCAs. The synth also features a new Character section which adds further sound sculpting options; Drive, Hack, Decimation, Girth, and Air are among the weird and wonderful options mentioned by DSI in their press release. Like all Dave Smith products, the Prophet 12 mainly shuns modern bells and whistles for hands on control via a five octave keyboard and a generous number of knobs, though it does include two touch sensitive sliders in addition to the standard modulation and pitch wheels, as well as a rather nifty looking LCD screen; the synth’s features can be previewed in the video below.

Further details are available from the Dave Smith website; the Prophet 12 is expected to be released in the second quarter or 2013 at a projected price of $2,999.