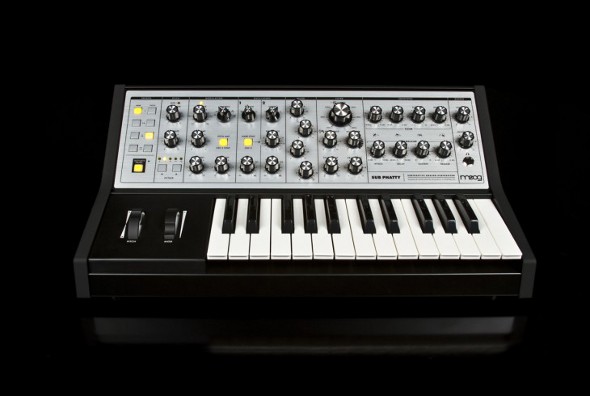 Like the other members of the Phatty family, the Sub is a synth built around two variable waveshape oscillators, but its described by the company as the “grittiest Moog synth ever”. This extra grit is provided by the new Multidrive circuit, which adds warmth at low settings but more reacts to resonance, waveshape, and oscillator level at higher settings, allowing more aggressive sounds to be created. In addition, the Sub Phatty is given added low-end grunt with the addition of a third square wave sub oscillator, and a separate noise generator ideal for percussion and sound effects.

Due for release this March, the Sub Phatty also sees Moog make a return to keyboard-based synthesisers; the company’s most recent products in the area of affordable synths – the Minitaur and Slim Phatty – had both omitted such a functionality, while the Sub features 25 fully sized, semi-weighted keys. In addition, the Sub Phatty looks to be a much more hands on unit than its Phatty brothers; while previous models only contained a handful of knobs with shift buttons required to access the full functionality, the Sub has a whopping 31 knobs, while hardware presets put it ahead of the Minitaur in that respect. In terms of price the Sub looks to be quite affordable; its recommended cost of $1099 puts it between the Slim Phatty and Little Phatty in terms of price. Full specs and sound samples can be found at the Moog website.

Moog also commissioned Flying Lotus to create a track using only the Sub Phatty; those wishing to hear the impressive results should check the psychedelic video below.