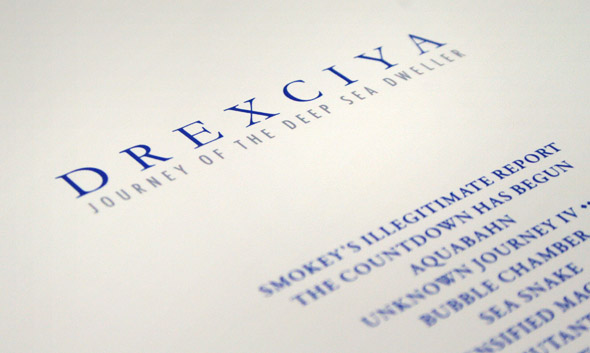 Along with Kraftwerk, Drexciya are one of the most mythologised acts in electronic music. Read any review or article about the Detroit act and invariably, there will be a reference or two to fish men, underwater civilisations and society-changing storms. In the same way that the Dusseldorf quartet are inextricably linked to the notion of man and machine creating art in perfect harmony, the Detroit duo are synonymous with mysterious sub-aqua worlds populated by fish men and the belief that their music was powerful enough to allow the anointed access to a higher plane of existence. Like UR, during their existence, Drexciya successfully pedalled this narrative to their fans, who along with wide-eyed journalists (this writer is as much to blame as anyone else for this) perpetuated Drexciya’s myths.

It explains why anything written about the duo invariably contains references to these images, like a de facto quota system for any self-respecting techno reviewer. The truth of course is markedly different and unsurprisingly, more mundane. Stinson and Donald were relatively innocuous people – again, take a lot that is written about them with a few pinches of salt – who happened to make mind-blowing music. Maybe it’s because there was such a gap between their everyday personas and their musical identities that they felt the need to invent a story to bridge that chasm.

Irrespective of the reason, this third and supposedly penultimate instalment of the retrospective series on Clone finds the duo in playful mode. “Smokey’s Illegitimate Report” kicks things off to the sound of a street rapper doing a shout out – this being Drexciya of course, his exhortations are caked in a layer of electronic drones. “Aquabahn” continues with this less than serious approach, with cheap, tinny synths and daft vocals providing a tribute to Kraftwerk’s ode to post-war European progress and modernity. Vocals also play a part in “The Countdown has Begun” – but in this instance, the tone is ominous as the countdown is heralded in by thundering drums and dense, grainy bass licks – while on “The Mutant Gillmen” what could only be described as a modern version of the doo wop ushers in clipped drums, subtle back beats and distorted, fuzzy bass.

The previous two compilations have focused on Drexciya’s ethereal sounds, but here we are treated to them in visceral effect. Apart from the aforementioned “Gillmen”, “Intensified Magnetron” manages to reconcile a discordant, splurging bass line with eerie synths, while “Nautilus 12” is a straight up grinding techno track, the straightest and most relentless that they made. But like an tubby kid let loose on a job lot of marzipan, it seems that for the purposes of this compilation the curators couldn’t keep away from the wry side of Drexciya’s canon. The buzz saw bass on “Flying Fish” underscores a high-pitched female vocal – is she the older sister of Dopplereffekt’s “Pornoactress”? – while the creepy organ on “Vampire Island” could be their own stab at a soundtrack to a fantasy horror film.

There are flashes of Drexciya’s cerebral sound, most notably on the wiry funk of “Sea Snake” and the high-paced rhythms and cascading melodies of “Unknown Journey IV”, but it’s “Aqua Wormhole” that epitomises this compilation and Drexciya themselves the best. It’s restless rhythm and hyperactive bass encapsulate the act’s nervous energy, but the melodies are almost puerile. Like an interpretation of a child’s lullaby, it demonstrates that underneath the hype and myth-making, Stinson and Donald were humans too – and it was exactly this fragility that made them so special.